Sandwiched between the Lakshwadeep Sea and the Western Ghats, Kerala is a bustling little green-and-silver, coconuts-and-water state on the west coast of India. It is bounded by Karnataka to the north, Tamil Nadu to the east, and the Arabian Sea to the west. Thiruvananthapuram is its capital.

Every district in Kerala has it's own unique culture and characteristics. Thiruvananthapuram is known for it's beach- Kovalam, the Sri Padmanabhaswamy Temple and various museums and palaces; Alappuzha for it's backwaters, Thrissur, the cultural capital, Kottayam for it's ancient churches, Kozhikode for it's old world charm and the entrancing Ponmudi or Golden valley. 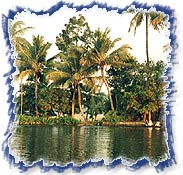 Though a bit of a tongue-twister, Thiruvananthapuram - the present official name, is closer to it's mythological origins. The word ' Thiru ananthapuram' means the city of Anantha or the abode of the sacred thousand-headed serpent Anantha, who forms the couch on which reclines Lord Vishnu, the preserver in the Hindu trinity.

Built on seven hills, it was the capital of the Venad chieftains. The city has grown as a tourist and commercial centre, with the International airport becoming the main gateway into Kerala. Being the state capital, it also throbs with political activity.


History of Kerala
Original inhabitants were animists, followed by the Dravidians. After Alexander's triumphant sweep over Asia Minor, the ports of Kerala became a link between the Middle East, the Mediterranean and China.

In 1498, Vasco da Gama made his historic landing on the Malabar Coast. In 1723, the East India Company signed a strategic treaty with King Marthanda Varma. For a few decades, Hyder Ali and his son -Tipu sultan proved to be a thorn in the flesh of the British, sweeping down several times into Kerala. In 1947, it was the turn of the British to pack their bags.

There is a small population of descendants of Indo-European migrants from the north. Certain hill tribes exhibit affinities with the Negrito peoples of Southeast Asia. Most Keralites are Hindus, but there are also large Christian and Islamic, and lesser Jain and Jewish, minorities.

The official language is Malayalam. A long contact with the outside world has led to an intriguing blend of cultures and given Keralites a cosmopolitan outlook

Culture of Kerala :
One aspect of the state's rich cultural heritage is manifest in its varieties of religious architecture: ancient Hindu temples with copper-clad roofs, later Islamic mosques with "Malabar gables," and colonial Portuguese Baroque churches.

Splendid paintings, especially murals, exhibit distinct local traditions and styles. The land is a flourishing center of the Kathakali dance form. The state has also a rich theatre tradition: the only surviving Sanskrit drama, Koottiyattam, is still performed by the Chakkiars of Kerala. Some principles of the Natya-Shastra are evident in their presentations. 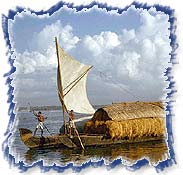 1. Archeological Monuments
Kerala provides some of the archeological monuments, depicting ancient rock temples, paintings and variety of arts and crafts.

3. Climate in Kerala
The climate is equable and varies little from season to season. The temperature normally ranges between 27º and 32º C in the plains but drops to about 21º C in the highlands.

Winter - 32 to 20 º C. Kerala is strongly buffeted by both the southwest and northeast monsoons. Rainfall in many parts of the state exceeds 118 inches. Best season: October to March.

4. Customs and Manners
Courtesy and hospitality is super. The word "namaste" is used to say good morning, good evening, good bye, or any kind of salutation on arrival or departure.

5. Culture of Kerala
One aspect of the state's rich cultural heritage is manifest in its varieties of religious architecture: ancient Hindu temples with copper-clad roofs, later Islamic mosques with "Malabar gables," and colonial Portuguese Baroque churches.

Splendid paintings, especially murals, exhibit distinct local traditions and styles. The land is a flourishing center of the Kathakali dance form. The state has also a rich theatre tradition: the only surviving Sanskrit drama, Koottiyattam, is still performed by the Chakkiars of Kerala. Some principles of the Natya-Shastra are evident in their presentations.

6. Dress
Dhoti and shirt is the common dress for men and Sari for the women. Mundu and chatta among the christian women, and mundu, rawka and neryiath, is common among the hindu women. Pants among men and churidar among women are also common.

8. Forests
Forests occupy 28% of the area and timber is an important industry.

9. Fishing and Hiking
Fishing and hiking facilities are available at thekkady wild game sanctury, neyyar dam and other reserviors and dams.

Onam Week celebrations, the annual harvest festival of Kerala begins in August and lasts for 10 days. Another important festival is the annual Pongala Utsavam, to which only women are allowed at the Attukal Bhagavathy Temple, Thiruvananthapuram. Therayattam festival is held to propitiate the gods and demons recognized by the pantheon of the Malayalis.

11. Geography
Kerala lies along a 590 km. Sun drenched, palm fringed, coast line of the arabian sea from cannanore to thukkalai, (near cape commerin) with sandy beaches on the west, the sahya mountains of the western ghats on the east, surrounded by tamil nadu on the south and east and karnataka on the north. Kerala has three distinct physiographical featurers, the highlands, the middle lands and the low lands with a total area of about 38863 sq, km. I.e. 1.04% of the total area of India.

13. Languages
Malyalam is the main language. Kannada in the northern districts and tamil in the eastern and southern districts are common. English and hindi are also in common use. 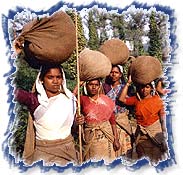 14. Plantation Crops and Spices of Kerala
Kerala accounts for 10.60 lakhs tons of rice,+91 % of the rubber produced in india. Kerala is rich in the cultivation of cashewnuts, pepper, coconuts, cardamom, cinnamon, ginger, mace nut meg. Cloves, tamarind, turmeric etc. Pepper continues to be the king of kerala spices.

15. Rivers and Backwaters
Kerala is a land of rivers and backwaters. 49 rivers, 46 west flowing and 3 east flowing, cut across kerala with its innunerable tributaries and branches. These rivers which are small and entirely monsoon fed, turn out to be rivulets in summer. The backwaters form a specially attractive and economically valuable feature of kerala. They include, lakes and ocean inlets which stretch irregularly all along. The biggest backwater is the vembanad lake which opens out into the arabian sea at cochin port. The other important back waters are Veli, Kadinakulam, Anjingo, Edava, Madayara, Paravoor, Asthamudi etc. Some of the most unforgetable sceneries is a back water journey from alleppey to the ancient port of quilon winding up the pampa river.

17. Ayurveda
Ayurveda evolved around 600 bc in india. This system of medicine stresses on the prevention of body ailments in addition to curing them. Kerala's equable climate, natural abundance of forests (with a wealth of herbs and medicinal plants) and the cool monsoon season (june - november) are best suited for ayurveda's curative and restorative packages. Infact, today, kerala is the only state in india which practises this system of medicine with absolute dedication.

Commercial poultry farming is well developed. Cottage industries--for example, the processing of coconut fibre and cashews or weaving--employ about three-fifths of Kerala's industrial workers. Most of those employed by larger industrial enterprises are engaged in food and textile processing.