For the discerning traveller, India is a journey through time. From the tree-lined avenues of New Delhi to the ancient fortress of Gwalior, this tour of Northern India spans two millennia. We visit the halcyon days of the British Raj, the great architectural masterpieces of Mughal Empire including the Taj Mahal, and the fabulous forts and palaces of the warrior kings of Rajasthan.

Along the way we discover tombs of Muslim saints, temples devoted to Hindu deities and sculptures of the mysterious jain religion. Tradition is the theme as we wander from the splendour of maharajahs' palaces to the quiet lanes of village India. This tour provides an excellent introduction to the main highlights of Northern India while taking the time to show you some of its less well known delights. The visit to Neemrana and Samode will undoubtedly enrich your first encounter with India. 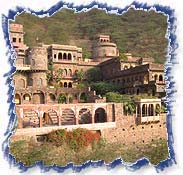 You will meet our representative and will be transferred to the hotel.

Day 02 : Delhi
Today, leave for sight-seeing tour, which includes Jama Masjid -the largest mosque of Emperor Shahjahan. Later proceed to Red Fort, Raj Ghat -Cremation site of Mahatma Gandhi, to India Gate -a 42 meter stone arch built in the memory of the Indian Soldiers who died in World War II, Drive past the President's House & Parliament House, Humayun's Tomb - a memorial of the Mughals -its design is inspired by the Taj Mahal, the Qutab Minar, Birla Mandir and Lotus Temple.

Day 04 : Neemrana - Samode
Drive to Samode (199 kms/ 4 hrs) astride an old caravan route, for an overnight stay in the fabulous Samode Palace, Home to the former ruling family. Lunch is taken among the fountains and pavilions of the Samode Bagh, the 400 year old formal gardens of the Palace. In the afternoon we taken a walk in the fascinating local village, where artisans produce printed cloth and glass bangles, to discover something of village life.

Day 05 : Samode - Jaipur
Drive to Jaipur (40 kms / 1 Hrs ) the 'City of Victory', via imposing Amber Fort where we ascend to the battlements by elephant. The high terraces of the fort offer commanding views of the surrounding countryside.

Afternoon embark on a of the enormous City Palace with its audience halls, courtyards royal apartments, and Hawa Mahal - an intricately carved facade that protected the ladies of the harem from the prying eyes of the city below. Lastly we visit the Jantar Mantar observatory, built in the early 18th century by Jai Singh who was obsessed with studying the stars. 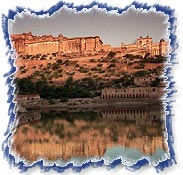 Drive to Agra (252 Kms/ 5 hrs) via Bharatpur Bird Sanctuary, a wetland that hides a multitude of rare species. We venture onwards to the ghostly city of Fathephur Sikri built as the capital of Akbar the Great in the 16th century and abandoned only 15 years later. Once India's granddad city, it is deserted yet perfectly preserved.

Day 07 : Agra - Gwalior - Agra
Journey by Train to Gwalior an ancient hill fort established in the 1st century AD and the site in more recent times of disturbances during the Indian mutiny. The fort, occupying a sandstone precipice in the center of the town, dominates the surrounding country side. Within its walls lie Jain sculptures and the beautiful decorated Man Mandir palace. Explore the tomb of the Afghan prince Ghaus Muhammad and the Tomb of Tansen before catching the late afternoon train, back to Agra.

Day 08 : Agra - Delhi
An early start to visit the Taj Mahal at dawn when its exquisite lines are matched by the delicacy of the light. Visit the magnificent Agra Fort before seeing the Itmad - ud Daulah a small intimate tomb and visit Sikandra.Later drive to Delhi ( 203 kms / 4 hrs ).Checkinto Hotel for overnight Stay.