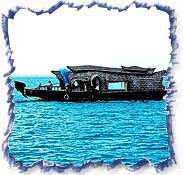 Located in the southern part of the Indian subcontinent, Kerala is the greenest state of south India sandwiched between the Arabian Sea on its west and the wooded western Ghats. It's land where nature demonstrates itself in all of its myriad aspects. Along with abundant natural beauty, the beguiling state also boasts a rich cultural heritage which is a huge draw for tourists from all over.

Backwaters in Kerala, an intricate network of lagoons, lakes, canals, estuaries and deltas, have played a vital role in boosting up the tourism sector of the state. A cruise along these backwaters in a Kettuvallom (A traditional houseboat) is the perfect way to have a rendezvous with pristine nature and to come face to face with the lifestyle that thrives on the sea shores. Sights of local fishermen, their unique ways of catching fish, their dressing sense and the exclusive Chinese fishing nets all add to the charm all the more. In a nutshell, it's an experience that must be had.

It's a passable stretch of 900 km of a mazy water world that welcomes legions of tourists, vacationers and nature enthusiasts from all over the country and outside. The Vembanad Lake is the largest backwater stretch in the state while the Ashtamudi Lake is the second largest.

Chief Backwater Destinations
Kollam
71 north of Thiruvananthapuram, Kollam is known for its marine and cashew industries. It was a major international trading centre in the past. The Ashtamudi Lake covers almost 30% of the town, making it an idyllic destination for backwater sailing.

Alleppey or Alappuzha
Nature reflects itself in numerous forms in the immensely beautiful town of Alappuzha. Harbouring numerous species of animals and birds, the quaint town has earned the appellation of 'Venice of the East'. Boat races, beaches, houseboat vacations, marine and coir industry are a few of the things that lure travellers to this part of the state.

Kumarakom
As you take a cruise north of Alappuzha, you arrive at Kumarakom, another enchanting backwater destination. This popular picnic spot offers exciting options of boating, fishing and sightseeing. The Kumarakom Bird Sanctuary is the cynosure of all attractions here. 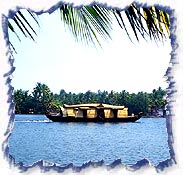 Cochin
Kochi or Cochin is a melting pot of numerous cultures and influences bequeathed by explorers and traders of the past. It's a cluster of islands, some of which include Bolghatty, Vypeen, Gundu and Vallarpadam. The Jewish Synagogue, Dutch Palace and the Chinese fishing nets are the major attractions here.

Thiruvananthapuram
Bounded by the forested Western Ghats on the east and the Arabian Sea on the west, Thiruvananthapuram is another important backwater spot in the state. Thiruvallam and Veli are the areas where you can feast you eyes on and stir your hearts.