Trivandrum - The Capital City of Kerala

The city gets its name from the word, Thiruvananthapuram, meaning the city of Anantha or the abode of the sacred Serpent Anantha on which Lord Vishnu, the preserver of the Hindu trinity, reclines. Trivandrum, the capital of the state of Kerala is a beautiful seaside city built on seven hills.

Stretching along the southern coast of the country, with the Backwaters reaching deep into the verdant countryside, Kerala affords a fascinating experience.

Trivandrum is one of the most beautiful cities of India. Perched on undulating terrain of low coastal hills near the southern edge of the Indian mainland, clean and green Trivandrum, which was previously called Trivandrum, is an ancient city with trading tradition dateing back to 1000 BC. 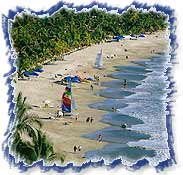 The city once formed a part of the capital of Travancore, which had its capital at Padmanabhapuram, now in Tamilnadu.The city is also a welcome departure from other large cities of India in its spacious layout and regulated life.

It is also an excellent base to explore the interiors of Kerala, the southernmost region of India, and from Kochi, the Lakshadweep Islands. The city offers all modern facilities needed by a visitor and is a centre for cultural activities.


Tourist Attractions :
» Sri Anantha Padmanabhaswamy Temple - The ancient temple is the most dominating feature of Trivandrum. Overlooking the Padma Theertham Tank. The temple is devoted to Lord Vishnu who is depicted reclining on Sri Anantha, the hooded snake from which the city derives its name. Exquisite stone carvings and pavilions are worth admiring. The temple is open only to Hindus and dress regulations are strictly enforced.

» Vettukad Church - 7 kms from Trivandrum. The 'Madre De Deus' Church popularly known as the Vettukad Church attracts thousands of devotees from all religions. The annual celebration here is called the 'Feast Of Christ, The King'.

» Sankhumugham Beach - The long stretch of clean sand is located near the airport. The water there, however, is suitable for bathing.

» Kovalam Beach - Kovalam beach is only 16 km. away from the city. This unique and uncluttered beach of silvery sands fringed with rows of tall palms, a sheltered bay provides a wide choice of water sports. 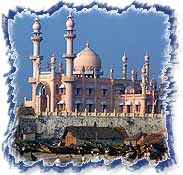 » Veli Tourist Village - A large recreational centre located near the airport along a sheltered lagoon offers landscaped gardens and water-sports facilities. It is a popular picnic spot. Accommodation facilities are available in the youth hostel.

» Aruvikkara - 16 km. It is both a pilgrim centre and a picnic spot, with a waterfall nearby. On the banks of the Karamana River, the spot houses a temple, where a rock cut shrine is dedicated to Goddess Bhagvathy, the divine embodiment of female power. A stream with fishes, which come up to be fed by visitors, is another attraction. more...

» Beema Palli - 5 kms south of Trivandrum. An important Muslim pilgrim centre, it is dedicated to Beema Beevi, a pious Muslim lady believed to have possessed divine powers. Devotees of all faiths visit the mosque.

» Vizhinjam - Near Kovalam, it's a fishing port, which is also important for an ongoing pioneer project to generate electricity from wave energy.

» Public Park - Truly a representative of the clean and verdant aspect of the city, the Public Park houses many important institutions, like the Zoo and the Botanical Gardens. The observatory on the Observatory hill is also located in the Public Park.