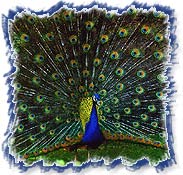 Periyar wildlife sanctuary owns a beautiful, placid lake at its centre. This reservoir meanders around the contours of the wooded hills formed with the building of a dam in 1895 and presents a permanent source of water for the local wildlife. Periyar Wildlife sanctuary is mainly known for its tiger reserve though many tourists come here to see the Indian elephants in the act of ablution and playfulness by the Periyar lake. There are about 800 elephants in the park. If you love watching elephants in various moods then this is the place for you.
Besides, you can visit several other animals in the confines of the Periyar National Park and tiger reserve. The birdlife at Periyar is also very rich. 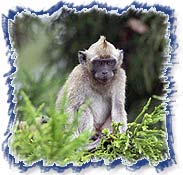 The Flora : The vegetation is generally deciduous in nature.
The Fauna : The various species of animals found here are Elephants, Gaur, Wild Pigs, Sambar, Barking Deer, Mouse Deer, Dole or Indian Wild Dog and very rarely, a Tiger which are estimated to be 40 in number. The four species of primates found at Periyar are the rare lion-tailed macaque, the Nilgiri Langur, Common Langur and Bonnet Macaque. Periyar is popular for the elusive Nilgiri Tahr which is rarely to seen.
Birds : The birdlife consists of Darters, Cormorants, Kingfishers, the great Malabar Hornbill and racket-tailed Drongoes.
Reptiles : The reptiles in the region include Monitor Lizards, Python and King Cobra.


Park Trip
Elephant Safaris and boat rides are available in the park to offer you the best views of the park. Boat safari is the best option to view the birdlife of the park.