Location of Alleppey : 64 Km North Of Kochi (Kerala)
Also Known As : Alappuzha
Main Travel Attractions : Nehru Boat Race, Ambalapuzha Temple, Mannarshala Temple
Best Season to Travel Alleppey : August to March India Tourist Guide
Alleppey is one of the most important tourist centers in the state of Kerala. Situated on the banks of Vembanad Lake, the town's commercial centre lives in a maze of canals. Set in the labyrinth of Backwater channels, the town is one of the best gateways to travel and explore the unspoilt countryside.

A historic and romantic name from Kerala's past, Alleppey was once one of the best known ports along the coast of Malabar. 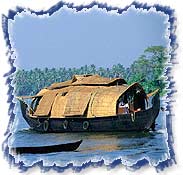 The centre for Backwater Cruises in Kerala, the Backwaters of Alleppey can be best experienced in a country boat. Alleppey is a bustling, messy town of ramshackle wood and corrugalated roof houses, chiefly significant in the Coir industry.

The large network of canals provides Alleppey its lifeline. It has a spectacular long sandy beach. At one end are the dense palm groves that are so characteristic of Kerala's landscape.

Temples in Alleppey :
» Ambalapuzha - 14 kms from Alleppey, the Sreekrishna Temple here is worth seeing. The temple boasts of its classic temple architecture and its 'Palpayasam' (sweet milk porridge), offered to the deity. The temple's main festival occurs in March/April. It was in this temple that the 16th century poet Kunjan Nabbiar staged his first Ottam Thullal, a solo dance performance based on social themes.

» Chettikulangara Bhagwathy Temple - The Bhadrakali deity is said to have miraculous power. The temple is abuzz with activity in the months of February and March on the occasion of Bharani.

» Mannarshala Temple - 32 kms, near Harippad, the temple here is an important centre of serpent worship in Kerala. On the day of Ayilyam, in the months of September and October, thousands assemble to worship the serpent god. 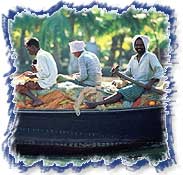 
Palaces in Alleppey :
» Krishnapuram Palace - The palace is located at a distance of 47 kms, at Kayamkulam, on the way to Kollam. The double storeyed palace contains one of the greatest Mural panels in Kerala. The 18th century Krishnapuram Palace with its gabled roofs, dormer windows, and narrow corridors, built during the reign of the Travancore monarch, Marthanda Varma, is a typical example of Kerala Architecture.

Called the Gajendra Moksham, it measures 14 feet by 11 feet and is at the western end of the ground floor, a short distance from the palace pool. Inside is also a museum of antique sculptures, paintings and bronzes.