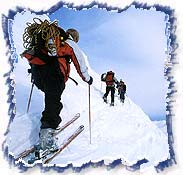 The thrill of slicing through the snow, purging through the billowy wind, is something only skiers will know best. Indian tourism industry has recognized skiing as one of its thriving tourist-pullers. From Jammu and Kashmir to the hills of the North Eastern India - skiing territories here can be the best you have known.

The Major Hideouts
The Himalayas lay open an endless expanse of snow to be veined with your skis. The height, the expanse, the snow, the man, the skis - the confluence is electrifying. The most visited skiing joints in the Indian subcontinent are located in Jammu and Kashmir, the hills of Kumaon, Himachal Pradesh and the North Eastern states of India. Our travel team has best itinerary deals for those who are planning to pack their bags already.

Jammu and Kashmir
Gulmarg becomes a tumultuous sea of skier tourists during winters. Expert skiers to beginners all crisscross the snow covered plains with their skis. You need not even exert yourself climbing slopes. Ski lifts and cable cars carry you to desirable heights. Besides, for all the equipments, you can safely depend on us (this goes for your entire tour). The Indian Institute of Skiing and Mountaineering, where skiing courses are offered is also located over here. 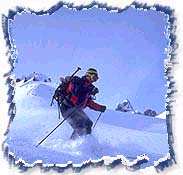 The Creator took time and a lot of it, when He was conjuring the stretches of Himalayan foothills. It is in one word - beautiful! Garhwal at 2,750 m is full of skiing hubs. A stretch of 10 - 20 km of thrilling snowed tracks await you at Auli. The backdrop of the Nanda Devi, Mana Parvat and many other snow capped citadels, form an enchanting panorama. Dayara Bugyal, with splendid ski slopes of 28 sq km and Mundali are another options.

Kumaon (Uttaranchal)
Here, Munsyari play the base camp for treks to Milam, Namik and Ralam glaciers. From the high altitudes of Khalia top and Betulidhar, you can slide down beating the wind.

Himachal Pradesh
Be it honeymooning couples or professionals, Himachal Pradesh is thronged with tourists seeking moments of rare adventure. The snow bathed hills of Manali, Kufri and Narkada are dotted with skiers and the fine rippling lines they draw with thier skis. Manali has skiers even in summers.

Skiing Through The News Desk