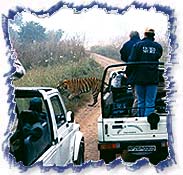 A Jeep could be your perfect companion for a rugged and exciting drive in the mighty Himalayas. The serene surroundings and the pure weather make a perfect ambience for the souls who want to feel they belong to nature. The jerks, clean and fast rivers, and the smoke coming out of the emitter behind the back of your vehicle, it's a journey into heavens. And as to filter your dirty soul, you rush through Amritsar and Dharmasala, two different ways to fetch the same god.

The package starts at Delhi, the capital and, well, it never ends. It stays in your blood, all your life.

Day 01 : Arrive Delhi
Arrival in Delhi, you are met and transferred to your hotel.

Day 02 : Delhi - Amritsar
Travel this morning by express train to Amritsar, the holy city of the Sikhs. The city takes its name from the sacred pool - Amrit (nectar) sar (pool). Afternoon visit the Golden Temple - The holiest of the holy Sikh shrines. In 1803, the Shikh ruler, Maharaja Ranjit Singh rebuilt the temple in marble gold, its domes took 880 Ibs/400 kgs of gold leaf to be covered. Ever since, it has been known as the Golden Temple.

Day 03 : Amritsar - Dharamsala Drive (199 kms / 6 hrs)
The morning we embark on journey, through the mighty Himalayas. A scenic drive through the mountains brings you to the upper Dharamsala or populary known as Meleodganj. This hill station with its magnificent view of the Dhauladhar range of the Himalayas is the seat of His Holiness. Fourteenth Dalai Lama and the Headquarters of the Tibetan government in exile. The town has a large Tibetan refugee settlement. The numerous monks in their flowing maroon robes, the many street shops selling momos & butter tea, and old Tibetan women in their traditional cloths, walking past serenely turning their prayer wheels, could well be in Tibet. Upon arrival check into Hotel.

Day 04 : Dharamsala
This morning visit "Namgyal monastery," Dalai Lama's main Temple, It houses giant stucco statues of the Buddha, Avalokiteshwara and Padma Sambhava. Later in the afternoon you could stroll around the local bazaar (market) selling Tibetan exotica or take an optional tour to Norbulingka Institute, Which is a 14 kms (drive down to lower Dharamsala) famed for keeping the cultural life of Tibet alive.

Day 05 : Dharamsala - Manali Drive: (265 Kms / 7 Hrs)
Early this morning, continue by jeeps to Manali (2050 Mt.). Enroute you can see the Tea Gardens at Palampur and also visit the Shiva Temple at Baijnath. Your drive from Mandi till Manali is all along the Beas River. Located in the midst of Pinewood and Cedar forests with high mountains covering above. It is known as the "Queen of hill Stations." 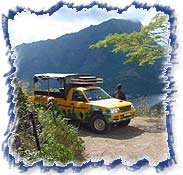 This morning you will visit the four-tiered, pagoda shaped Dhoongri wooden temple (Hidmba Devi) with its intricately carved roof and a front doorway with figures and symbols. Drive to old Manali, its old beautiful houses and ancient Manu Temple. This afternoon an excursion tour of Nagger castle and the (Ro rich) art gallery.

Day 07 : Manali - Keylong Drive (3350 M / 115 Kms)
Early this morning drive over the Rohang Pass (3980 m) to Keylong - The district headquarters of Lahul & Spiti, which is like an oasis of green fields, willow planted watercourses and mighty brown mountains. The lady of Keylong is an imposing snow covered peak it is an amazing rock feature. Three kilometers from Keylong is the famous Shashur gompa, dedicated to the Zanskari lama. It was built in the 16th century and is of the gelukpa order. The five meter thangka is famous in the region.

Day 08 : Keylong - Sarchu Drive (4630 M / 163 Kms)
Drive to Darcha, which is 18 km. From Keylong, start of a popular trekking option to get into Padum, and in winter it is the only way to Zanskar. The road from Darcha to Baralacha La (4892 m) goes through Zing-Zing Bar and the sky blue Suraj Tal lake. Sarchu is just over the state line into Himachal Pradesh, and is where most buses stop overnight. Tents.

Day 09 : Sarchu - Leh Drive (3505 M / 176 Kms)
Today drive to Leh is quite interesting with an incredible 20 kms of switchback road including a spine-tingling 21 loops or hairpin bends, on one side of one mountain. After covering this stretch you cross the second highest pass on this road Lachlangla (5060 m). You stop at Pang for lunch. Continue your drive and see the terrain changing. You cross the highest pass on this road Tanglangla (5378 m). The road Manali to Leh is the world's second highest motorable road, reaching an elevation of 5378 m at Tanglangla pass. Hotel Shambala or similar.

Day 10 : Leh
This morning proceed for sightseeing of Shankar Gompa, Leh Palace and Namgyal Tsemo. In the afternoon visit Spitul Gompa. The Sankar gompa is located a couple of kilometers north of the town center, The gompa belongs to the Gelukpa order and has an impressive impression of the Buddhist deity, Avalokiteshwara Padmahari or Chenresig, with 1,000 arms and an equal number of heads. At a distance of 8 km from Leh, standing majestically on top of a hillock overlooking the Indus Valley lies the spituk Gompa. It was built in the 15th century and houses a collection of ancient masks antique arms, icons and thangkas. Higher up the hill is the Mahakal temple, containing the shrine of Vajrabhairava. 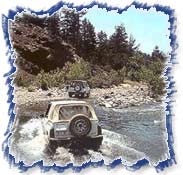 Early this morning embark on a full day excursion to Thikse Monastery where you will see the early morning prayer ceremony. Later visit Hemis monastery the most important and the richest monastery in Ladakh. On the way back visit Shey monastery. About 20 km south of Leh, Thikse gompa is an imposing monastery and one of the finest examples of Ladakh architecture. It belongs to the Gelukpa order. The 12 story-monstery complex contains numerous stupas, statues, thangkas, wall paintings, swords and a large pillar engraved with the Buddha's teachings. At a dislance of 45 km south of Leh, Hemis is one of the biggest gompas in Ladakh. Built 1630, it belongs to the red sect, Brokpa. It is also known as Chang Chub Sam Ling or "the lone place of the compassionate person." To commemorate the birth of the renowned Indian sage, Padmasambhava, the annual Hemis festival is held in the month of June/July. Until the I6th century, the Shey gompa was the royal residence. It is located at a distance of 15 km south of Leh. This Palace Monastery has the largest statue of Maitreya Buddha (the Buddha to come) in Ladakh. Erected in the mid 17th century worked out of gold and gilded copper sheets with blue hair, it stands 17.5 m high. Built in 1814, the Stok Palace is the site where the last king of Ladakh died in 1974. The museum here has a unique collection of royal ornaments, and traditional clothing, along with exquisite thangkas representing the life of the Sakya Muni Buddha.

Day 12 : Leh - Delhi
Fly to Delhi. Later, leave for sightseeing tour, which a includes Jama Masjid -the largest mosque of Emperor Shahjahan. Later proceed to Red Fort, Raj Ghat -Cremation site of Mahatma Gandhi, to India Gate -a 42 meter stone arch built in the memory of the Indian Soldiers who died in World War II, Drive past the President's House & Parliament House, Humayun's Tomb -a memorial of the Mughals -its design is inspired by the Taj Mahal, the Qutab Minar, Birla Mandir and Lotus Temple.