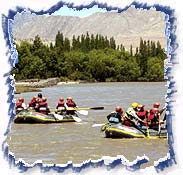 Alone in a tumultuous current of roaring water with only a row and the kayak with the waves thirsting to engulf your being any moment - some people must be made of a different 'stuff' to call that - thrilling! And that 'stuff' sure is called bravado! Adventure partisans from across the globe come trotting to challenge the libertine waters of the Indian rivers.

Rapacious Waters Await You At
Stretching 3,200 kilometers along India's northern frontiers, the Himalayas are veined with a plethora of wild water bodies. For those with a whitewater-fixation, these rivers need no introduction.

Jammu and Kashmir
The Indus river waters, flowing across high altitude deserts, between Spituk and Saspol have professionally guided rafting trails. For the experts, the thrill lies beyond Saspol when the waters get more than stormy. The Zanskar river meandering alongside the Zanskar mountains, has the most spine-throbbing whitewater rafting course. July till end of September is the best time.

Himachal Pradesh
The rivers Chandrabhaga (Chenab) in Lahaul, the Satluj near Shimla, the Ravi near Chamba and the Beas near Kullu offer immense whitewater rafting possibilities. These snow from the mountains stream down into them creating super-sonic currents. 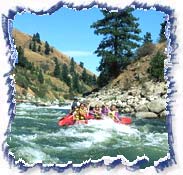 The Garhwal Himalayas are streamlined with the mighty Ganges and its tributeries, considered exciting points of whitewater rafting. The main tributaries Alakananda and Bhagirathi meet Devprayag, frothing from their racy descent. From there, the Ganga dilutes into a 70 km drop pool, where grade III and IV rapids, the 'Wall' at Bysi and the 4 km 'Golf-Course' form some of the most enthralling rafting delights. The bordering slopes are forested with pine and oak thickets and dotted with rare wild fauna. The Ganga speeding past Rishikesh in Uttaranchal with 12 major rapids is a whirlpool of crazy currents, rafter pilgrims on their trip to the Hindu spiritual joint Haridwar and adventure mongers. October to April is the best time to be there.

The Kali River
At the Indo-Nepalese international boundary, this meandering river makes an exhilarating blend of long float trips, great angling and class III/IV white water rafting. Visit during October to May.

Sikkim
The Teesta River forms a challenging course for white water rafters as it meanders down the craggy eastern Himalayan mountains savoring a blend of panoramic nature and exciting adventure.

Brahmaputra Rafting
The mighty Brahmaputra snakes through the northeastern India, both mystifying and destructing the coastlines with its water. For rafters, it awaits intriguing courses with multi-rapids. The Subansiri, one of its major tributary, has deep gorges waiting for you between the months of November and March.

Our tour itineraries blend your rafting escapades with trekking and camping expeditions. Pack your bags if you want to challenge the unruly waters of a paradisaical land.