Area : : 29 sq km
Population : 4,02,700(approx.)
Picture yourself on a beautiful Beach with silver sand to swim and surf, white Churches surrounded by green paddy fields and coconut groves, going for a long stroll on a starry night, and somewhere someone is playing a romantic tune on his guitar. That’s Goa for you

It is a blend of the east and west, with Christmas and Carnival are celebrated as enthusiastically as Diwali and Durga Puja. In its Latin architecture there is also a preference of a fish-meat cuisine. The prevalence of cheap beer blends perfectly well with the traditional tipples of Feni, the local hooch and toddy.

Panaji still looks and feels like any Portuguese town with grand public buildings and old houses with over Hanging balconies and numerous bars & cafes.

Tourism is the main money-spinner business in Goa. But on the coast, coconut cultivation and fishing are still the main sources of income. Tourism happens all over the year but if you want to enjoy the Carnival better visit in Feb-March. 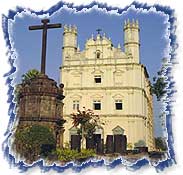 Carnival in Goa is a non-stop 3-day festival of color, song and music, providing a healthy entertainment for all, young and old. The soothing climate, full of fun- 'n' -frolic, which the Carnival generates, is much longed for. It does not matter whether one enjoys or see others enjoying. There is enthusiasm and happiness all around.

The word 'carnival' is said to be derived from the Latin 'Carne', meaning meat, and 'Vale', which translates to 'good-bye'. Some also link the word to 'Carnislevamen' or 'the pleasures of meat', focusing on the enjoyment of meat during the festivities, before the abstinence that follows during Lent.

Another hypothesis suggests that the word came from 'Carrus Navalis', the horse-drawn, boat-shaped carriage that was paraded during the Roman festival Saturnalia, in honor of Saturn. It carried men and women in fancy dresses, wearing masks, and singing obscene songs. It is possible that the present-day concept of a carnival emerged from this parade.


Originination Of The Festivity :
The Goa Carnival is an integral part of the Portuguese heritage of the state, which was a dominion of Portugal till 1961. The carnival epitomizes the fun-loving culture that is characteristic of Goa. It was introduced by the erstwhile rulers as a rowdy celebration in which flour, eggs, oranges, lemons, mud, sand-filled gloves along with dirty water, various liquids and glue were aimed at passersby. Used pots, pans, and other kitchen utensils were also thrown out of windows. Perhaps this was done to discard the old and the dirty before the Lenten fast.

Fierce battles were waged in the streets, with plaster-of-Paris eggs, wax lemons, corncobs and beans. Blows were dealt out liberally, with brooms and wooden spoons. It was also an occasion for unchecked eating. People gorged on rich food at lavish feasts, and convents distributed cakes and pastries. Though celebrated for only three days, the preparations for the festival would take many days, and build up to a frenetic pitch by the eve of the carnival. The carnival in Goa still retains the core of the original. A King of Chaos is elected, called King "Momo". He presides over the three-day festivities, which attract visitors from all over India and abroad. 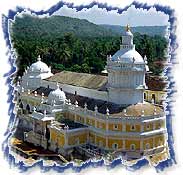 Street Plays, songs, dances, and unrehearsed farces mocking the establishment are performed before an enthusiastic, responsive audience. Floats depicting popular lullabies and nursery rhymes make a whimsical and colorful sight on the streets. In the three days of celebrations, cultural functions and competitions abound, and are judged by specially selected people. King Momo distributes the prizes to the winners.

The contestants wear colorful costumes and elaborate masks. Amidst the outrageous dresses seen on the street are some made of sheer, transparent polythene. In the fun-filled ambience, people smear color on each other, instead of the flour, eggs, fruit and water that used to be used in earlier times.