Introduction :
The city of Udaipur is located in the Aravalli ranges of the royal state of Rajasthan and is also known as the jewel of Mewar. Also known as the City of Dawn, Udaipur is surrounded by ancient mountains and set on the edge of three lakes. It is a beautiful old city with narrow lanes flanked by bright stalls, gardens, lakes, palaces and temples meandering through it. It is situated at a distance of about 405 km from the state capital Jaipur.

Udaipur was founded in 1559 and named after Maharana Udai Singh. It then replaced Chittor as the capital of the Sisodia dynasty, when according to legend, the Maharana went out hunting one day and met a holy man who blessed him and told him to built a palace at that very spot, as it would be well protected. Today, Udaipur is a one of the better-known tourist destinations of India and an integral part of any itinerary for Rajasthan. 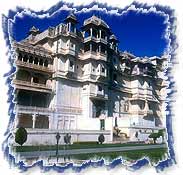 » Lake Palace and Lake Pichola - Lake Palace is a shimmering granite and marble structure that overlooks the aquamarine waters of the Lake Pichola. It is a harmonious arrangement of pavilions, courtyards, terraces, rooms, corridors, and hanging gardens. According to legend, the eight marble porticos that mark the spot where the Mewar sovereigns were weighed in gold, the equivalent value of which was then distributed to the poor.

» Jag Niwas and Jag Mandir - The summer residence of the princes of Mewar was called Jag Niwas, and is today a magnificent luxury hotel. Jag Mandir, the other island palace has a marble dome and is made in red sandstone. It was a refuge for the Mughal Emperor Shah Jahan when he was exiled after a quarrel with his father, Emperor Jahangir.

» City Palace and Museum - The imposing City Palace towers over the Pichola Lake on a hill and is the largest palace complex in Rajasthan. the complex manages to retain a uniformity of design despite being a conglomeration of buildings constructed by various Maharanas over a long period of time. It has many courtyards, pavilions, terraces, corridors, rooms and hanging gardens.

» Saheliyon-Ki-Bari - To the north of the city lies Saheliyon-Ki-Bari, a garden of the maids of honour. This small ornamental garden has many fountains, delightful lotus pools, chiselled kiosks and marble elephants.

» Jagdish Temple - The Jagdish temple was built in 1651 by Maharana Jagat Singh. Built in Indo-Aryan style , the temple is the largest temple of Udaipur. A black stone image of Lord Vishnu and a brass image of Garuda can be seen here. 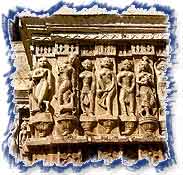 There are a very large number of places that can be visited when on a tour of Udaipur.

» Ahar - Ahar is the ancient capital of the Sisodias that lies about three kilometers from the town of Udaipur. It boasts of numerous chhatris or cenotaphs that commemorate Mewar’s royalty.

» Ranakpur - Ranakpur boasts of some of the most exquisite Jain temples in the country.

» Sajjangarh - Sajjangarh is a dramatic 18th century palace that gives a breathtaking view of the Mewar countryside, and lies on a hilltop just outside Udaipur. It was initially intended to be a five-story astronomical center, but was later abandoned and used as a monsoon palace and hunting lodge.

» Eklingji - Eklingi is set in a deep ravine containing the Eklingji Lake about 22 km from Udaipur. The Ekalinga temple here is made of white marble with a two-storey mandapa to Shiva.

» Nathdwara - Nathdwara is an important Hindu pilgrimage center that lies 48 kilometers from Udaipur. It is also famous for nurturing the glorious tradition of Pichwal paintings.

» Chittorgarh - Chittorgarh is one of the oldest cities in Rajasthan. It was capital of the legendary Sisodia Dynasty of which Rana Pratap and Rana Kumbha were the kings.

Its majestic fort dominates the city. Most of the attractions are located inside the walls of the fort. Kumbhalgarh, Ghanerao, Rajsamand Lake, Jaisamand Lake, Sardarsamand, Haldighati, Dungarpur, Narlai, etc are the other historical places worth visiting near Udaipur. 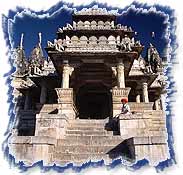 The city of Udaipur is connected by regular flights to Delhi, Jaipur, Jodhpur, Aurangabad, and Mumbai. It lies on the Western Railway meter gauge network, and is connected to Delhi, Chittor, Ahmedabad, Jaipur, Ajmer, and Jodhpur. We offer complete travel and tour packages that are inclusive of hotel booking, air booking, and car-hire, services, for the entire duration of your stay in the Mewar city of Udaipur.

Udaipur has a tropical climate with temperatures ranging from a maximum of 38.3°C to a minimum of 28.8°C during summers. Winters are slightly cold with temperatures between 28.8°C to 11.6°C. the winters months between September and March are the best period for visiting Udaipur.