Area : : 29 sq km
Population : 4,02,700(approx.)
Bharatpur, a small town of Rajasthan, nestles Keoladeo National Park, the site listed as UNESCO World Heritage. Famous as, Bharatpur Bird Sanctuary, it lies between two of India's most historic cities, Agra and Jaipur. It is situated about 190 km from the national capital of Delhi. The name 'Keoladeo' of the sanctuary is derived from the name of an ancient Hindu temple devoted to Lord Shiva.

Bharatpur is mainly an artificial creation to conserve birds, after government banned the indiscriminate shooting of birds in 1965. The area was deemed a national park in March 1982, while in 1985, Bharatpur was accepted as a World Heritage Site. 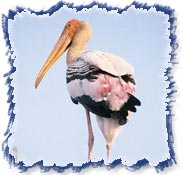 Some 377 species can be spotted at Bharatpur Sanctuary, making it one of the most inviting destinations in the world for ornithologists, amateurs and nature lovers. One-third of birds at Bharatpur are migrants, many of whom spend their winters before returning to their breeding grounds in the Arctic and Central Asia.

Best time to visit the sanctuary is between October and February when many migratory birds can be seen, including the endangered Siberian Crane. Tourists can enjoy to see the Saras Cranes (the largest bird) and several other species of cranes-corcomorants, egrets, darters, herons, storks, geese, ducks, eagles, hawks, shanks, stints, wagtails, wheatears, flycatchers, buntings, larks, spoonbills, kingfishers, owls and pipits, who have made Bharatpur their temporary abode.

There are approximately 56 different families of birds, of which the Passeriformes (156 species) and Charadriformes (56 species) dominate.


How to reach :
Bharatpur is on the Agra-Jaipur highway, just a 2-hour journey by bus from Agra (55 km) and 4-5 hours journey from Delhi. The nearest rail junction is Bharatpur, which is well connected to Delhi, Bombay, Ahmedabad, Jaipur and many other parts of India. Private as well as state transport buses link Bharatpur with other parts of Rajasthan.

Mandawa lies in the heart of shekawati a painted arched gateway adorned with Lord Krishna and his cows leeds to the bazzar. You can wonder through the streets where mansions of rich merchants are adorned with elaborate frescoes.