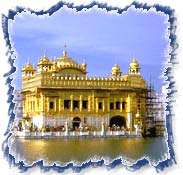 The Golden Temple, popular amongst the adherents of the Sikh religion as Sri Harmandir Sahib or Sri Darbar Sahib, is the sacred seat of Sikhism. Bathed in a quintessential golden hue that dazzles in the serene waters of the Amrit Sarovar that lace around it, the swarn mandir (Golden temple) is one that internalizes in the mind scape of its visitors, no matter what religion or creed, as one of the most magnificent House of Worship.

Through the quiet lanes of history
The origin of this sacred shrine is shrouded in mystery. The most plausible genesis can be traced back to the then prevailing social belief that the waters of the present Amrit Sarovar or the Lake of Nectar had magical medicinal properties that could cure various ailments as serious as leprosy. The third Sikh Guru, Amar Das even found a herb on its bank that cured the skin ailment of his predecessor Guru Angad. This place became the obvious choice of Guru Amar Das and his successor Ram Das for building an abode of worship for the propagation of their faith. The construction of the tank and the formation of a quiet hamlet of followers in its vicinity was completed by 1577. The fifth Sikh Guru Arjan Sahib, when he ascended the throne, decided to construct a temple right in the middle of that tank. It is believed that at his behest a Muslim saint, Hazrat Mian Mir ji of Lahore, laid the foundation of the temple in December, 1588. Laborious toils of Sikh devotees followed to give to the world one of its most beautiful shrines ever. The tank was christened Amritsar - that became the very name of that place.

The Structure
The Golden temple, unlike those echoing the Hindu temple architecture, was constructed on the lower level on a 67 ft. square platform in the centre of the tank and had four entrances. The basic architecture resonates both Hindu and Muslim elements. The golden gilding and the rich ornamentation with precious stones date back to the reign of Maharaja Ranjit Singh. It treasures on a jewel-studded platform, the Adi Grantha or the sacred scripture of Sikhs wherein are enshrined holy inscriptions by the ten Sikh gurus and various Hindu and Moslem saints. The 202 ft bridge that leads to the temple is connected with the circumambulatory path that borders the temple and leads to the 'Har ki Pauri' or the steps of God. The very structure seems to emanate the secularism that its builders aimed to propagate and is often quoted to stand as the progenitor of the independent Sikh school of Architecture. 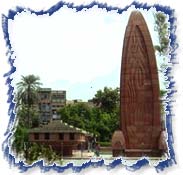 The chants of the devotees sanctify the entire area from dawn till dusk and the pilgrims and tourists strolling in its vicinity and around the marbled concourse encircling the pool, experience a spiritual nirvana too powerful to be contained in mere language.

Don't miss these out...
» Monument of Jalianwala Bagh - This is the martyr's memorial built in the memory of the unarmed people who died in an open firing by General Dyer on April13, 1919. The place still resonates of the tragedy that registers itself as one of the cruelest in the history of humanity.

» Ram Bagh - Here is the summer palace of Maharaja Ranjit Singh and a museum. This garden is laid out on the pattern of Shalimar Bagh at Lahore. The museum houses miniatures, coins, weapons and the replica of most famous diamond Kohinoor.

» Wagah Border - Wagah, an army outpost on Indo-Pak border is of tourists interest because of the "Beating the Retreat" ceremony every evening. Soldiers from both countries march in perfect drill and the ceremonial lowering of the flags is carried out with great pomp. As the sun sets, nationalistic fervour reaches its zenith and lights are switched on amidst thunderous applause.

» Mata Mandir Temple - An old pious lady built a Hindu temple at Rani ka Bagh, on the lines of holy shrine of Mata Vaishno Devi at Katra (Jammu). Pilgrims from far and wide flock to seek the late Mata's blessings.

Accessibility
Amritsar has both international and domestic airports with excellent connectivity. The network of roads connect Amritsar to the major cities in Punjab and the metros in India. Railways include Express, Mail and Passenger trains. It is also connected to Lahore, in Pakistan, by train.