Taj Mahal - A Tribute To Love 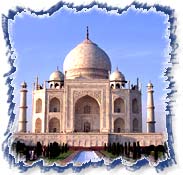 A three centuries old white marbled Mausoleum found India a position amongst nations with architectural 'wonders'. What is it so regal about this ancient monument that makes grizzled-heads sit for months trying to appropriate its grandiose in their canvass, scribes pile volumes of outpour, tourists from across the earth stand enamored at its sheer elegance. The Taj Mahal - construed by Mughal Emperor Shah Jehan for his wife Mumtaz Mahal is an eclectic assortment of Persian and Turkish motifs blended with Hindu elements.

The Legend - Taj
Arjumand Banu, fondly remembered as Mumtaz Mahal or the 'Chosen One of the Palace', was more than a wife to the fifth Mughal Emperor Shah Jehan. Amongst his many wives, she was the most loved and trusted. Her death so crushed the emperor that he locked himself in a room for more than a week without food. His black beard turned completely white when he emerged from his seclusion with the plan of immortalizing their love with an architectural insignia - the greatest the world ever saw. The particular site was an obvious choice because he could view it clearly from his palace - the Agra Fort. Construction began in 1631 and took 22 years, toils of twenty thousand labourers, about 1,000 elephants for transportation and the inimitable expertise of Iranian architect Ustad Isa, to complete what became the Seventh Wonder of the World.

Refuting the romanticism that bathes the legend, some historians believe that the grandeur of the Taj was far too noble to commemorate the love of one woman. Though it was a mausoleum, it can equally be a symbol of an autocratic ruler flaunting his own grandeur. Whatever the cause, India and the world will forever remain indebted to him for the earth's most beautiful mausoleum. 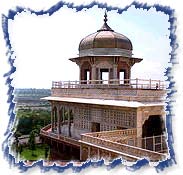 Only a stroll in the plush gardens laced around the Taj Mahal on a moonlit night will do justice to feeling the magnanimity of what Rabindranath Tagore once called "like a solitary tear suspended on the cheek of time". A classic reflection of the Mughal architecture of that age, the monument is set amidst sprawling gardens overlooking the meandering Yamuna river. The four minarets, set symmetrically about the tomb, are scaled down to heighten the effect of the dominant, slightly bulbous dome. Within the dome lies the cenotaph of the queen decorated in pietra dura and the 99 different names of Allah encrypted. As many as 35 different types of precious stones - turquoise, jade, agate, coral, lapis Lazuli, onyx, bloodstone, cornelian, jasper, garnet and malachite used to fashion blooms of fuchsias, lily, honeysuckle, etc. So exquisite is the workmanship that the Taj has been described as "having been designed by giants and finished by jewelers". The buildings white marbled exterior responds 'with an extraordinary subtlety to changing light and weather', giving it that aura of ethereal aplomb. It seems bathed in a pink glow in the morning, milky white in the evening and varnished in a tint of gold on a moonlit night.

Don't miss these out...
» Agra Fort - The Agra Red Fort or the Lal Quila is best described as a walled palatial city. It was the royal abode of Mughal emperor Shah Jehan when he had his capital in Agra. This was where he was later kept in captivity by his son Aurangzeb.

» Fatehpur Sikri -A World Heritage Site in Agra built by Mughal Emperor Akbar. This used to be his capital and the emperor similarly populated it with a plethora of forts and old buildings.

» Jama Masjid - A large mosque attributed to Princess Jahanara Begum, built in 1648 during the reign of father Shah Jahan. Notable for its unusual dome and absence of minarets.

» Akbar's Mausoleum - A blend of Hindu and Muslim architechture, this deep-red sandstone and marbled mausoleum was designed by the emperor himself and modified by his son emperor Jehangir. The Buland Darwaza or the Gateway of Magnificience at its entrance seems more majestic than the Mausoleum itself at times.

Accessibility
Agra airport is well connected to major Indian cities. From Delhi it takes 40 min by air to Agra. The Agra Cantonment Station has a good network of railways and branded trains like Shatabdi, Rajdhani, Taj Express, Palace On Wheels include the list of options. By road, Agra is only 204 km from Delhi, i.e. about 4 hours. Buses can be boarded from Delhi, Jaipur, Mathura, Rajasthan and so on.