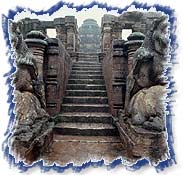 Konark is a derivative of the appellation for the Sun God or the Konarka. Needless to say, the Sun Temple with its magnanimous twelve-pair wheeled chariot drawn by 7 brawny horses is the pride of this small, yet much visited coastal tourist hub. A beatific reflection of Orissa's medieval architecture, the Sun Temple has been designated a United Nations (UNESCO) World Heritage Site.

Where the Sun God Reigns
The 13th Century Sun Temple or the Black Pagoda was built in black granite by King Narasimhadeva I (AD 1236-1264) of the Ganga dynasty. It was used as a navigational aid by the European sailors crossing the Bay of Bengal. They named it Black Pagoda to distinguish it from the 'white' Jaggannath Temple at Puri, another famous coastal temple. The temple is now partly in ruins, and a collection of its sculptures is treasured in the Sun Temple Museum, which is run by the Archaeological Survey of India.

The Structure
The massive temple stands so unmistakably high and aloof that nothing could have been a better place to worship the Sun - the singular matrix of power that survives the Universe. The temple resembles the massive chariot pulled by 7 spirited stallions that ferried the Sun God across the heavens. There are 24 gigantic wheels, intricately carved and with spokes that look like sundials. So scientifically are these placed that one can actually gauge the time of the day from the shadow they cast on the earth. The pyramidal roof of the temple, made of sandstone, soars over 30 m in height. Erotic sculptures inspired from Kama Sutra, like those of Khajuraho, abound the walls of the temple. At the entrance of the temple is the Nata Mandir where the temple dancers used to perform dances in homage to the Sun-god.


The poet Rabindranath Tagore once wrote of Konark: "Here the language of stone surpasses the language of man". The Sun temple is truly a perfect insignia of a powerful God and visitors really do feel the strength of the whole faith in the Sun God in the temple premises. With the Top Travel & Tours' guides, your visit can be made all the more exciting and knowledgeable. 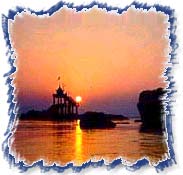 » Mayadevi Temple - To the south-west of the temple, are the remains of the Mayadevi Temple, thought to be dedicated to one of the Surya's wives. However, the temple is now believed to be an older Surya Temple.

» Konark Beach - Three kilometres away from the Sun Temple is the sprawling beach. You can either walk down or hire a bicycle or cycle-rickshaw to reach the beach. A stroll or a sun-bath - near the Sun Temple - can be an inexplicable experience.

Accessibility
Nearest airport at Bhubaneshwar is 64 km away and is connected to Kolkata, Delhi, Hyderabad, Chennai and Nagpur. At 31 km is the nearest railhead at Puri. The National and State Highways connect Konark with Puri, Bhubaneshwar and other major places in Orissa.You can also hire taxis and private buses to get to Konark from Puri.