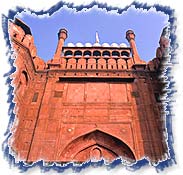 An emblem of India's sovereignty, the Red Fort or the Lal Quila spreads across a vast expanse of Old Delhi, reminiscent of the regal ancestry the present India is born out of. In the eve of India's independence in 1947, from the heart of this citadel resounded the singular voice of the nation's first Prime Minister Jawaharlal Nehru, "..At the stroke of the midnight hour, when the world sleeps, India will awake to life and freedom..". And ever since the Red Fort has been the peerless locus of the Indian Prime Ministers' speech every Independence day.

The heritage that is Lal Quila
When Mughal emperor Shah Jehan shifted his capital from Agra in 1638, the walled city Shah Jehanabad and the Quila were concieved. The enclosure is peppered with the shopping arcade Meena Bazaar, the Diwan-i-Khas and the Diwan-i-Am - the erstwhile Parliament houses, numerous palaces, Hammams or the royal baths, Moti Masjid (the Pearl Mosque), Museums and a plethora of ancient royal architecture befitting the Indian capital of yore. In its premises was once the jewel-constellated Peacock Throne where the emperor of India proudly sat and administered. A legion of plunderers, especially the British ruthlessly swelled the Victorian heirloom with India's treasures. The Red Fort was made the seat of India's First War of Independence of 1857, degradingly tagged the Sepoy Mutiny by the British.

The Structure
It took nine years to weave roads and residences, bazaars and mosques enclosed in a rubble wall with 14 gates, some of which still exists. A 1.5 miles of 60-110 ft battlement wall frames the fort opening at two gates - the Lahore Gate and the Delhi Gate. The Lahore Gate leads to the vaulted shopping arcade called the Chatta Chowk or the Meena Bazaar where the royals shopped every Thursday. Just above the musicians gallery or the Naubat Khana, is the Indian War Memorial Museum that houses a priceless collection of armours, guns, swords and other items used during the war. The large manicured lawn houses the Diwan-i-Am and five other palaces - the Mumtaaz Mahal (Palace of Jewels), Rang Mahal (Palace of Colors), Sheesh Mahal (Palace of Mirrors), Khas Mahal (the emperors private rooms), Tasbih Khana (where the emperor used to worship) and so on. The Diwan-i-Khas or the Hall of private audience was once extolled by Persian poet, Amir Khusrau - "If there is a paradise on earth, it is here, it is here, it is here". But today, the Diwan-i-Khas is only a withered reminder of the glorious past.

The evenings at the Fort come alive with a sound and light show in both English and Hindi, recreating the legacy of the Lal Quila. Tourists should not miss a visit to the fort if you want to 'feel' India in a few hours. Though it is impossible to 'feel' India in its entirety, this rapturous brush can be considered at least an initiation. 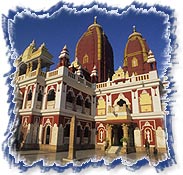 Don't Miss these out..
» Birla Mandir - The Birla Temple enshrines Lord Narayan - the preserver of the Hindu Trinity and Laxmi - the Goddess of wealth. Partake in a serene ambience of worshippers and sadhus.

» Lotus Temple - A lotus shaped architechtural marvel in white erected as a symbol of the Bahai faith! It draws into its sanctum sanctorum people from all races, creed and community.

» Akshardham temple : Dedicated to Lord Swaminarayan, Delhi's Akshardham Temple is a miraculous confluence of shrines, sculptures, lakes, devotees and an atmosphere of entertainment and enlightenment.

» India Gate - A high arched gateway - built as a memorial to the Indian soldiers killed in the World War I. The vast spread of lush green lawns bordering it come alive in the evenings with picnicking families and vendors!

Accessibility
Delhi has both domestic and international airports with excellent connectivity, being the Indian capital. Same goes for roads and railways. The Red Fort is a few minutes' walk from the Old Delhi Railway Station.