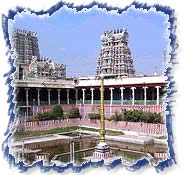 Bathed in a cascade of colors is the beautiful Meenakshi Temple - a typical, yet classic representative of Dravidian temple architecture with its gopurams (large sclupted gateways) and mandapams (multi-pillared halls). Lord Shiva and his consort Meenakshi or the Fish-eyed one are the reigning deities here. The complex, the dual shrines dedicated to the god and the goddess add to the elegance and the mystery of a divine legend - not widely known in the other parts of India.

The Legend of Meenakshi
The Pandyan King, who is accredited to have built the princely state Madhurai (Former Madurai), was childless and after years of prayers and devotion was blessed with a Ayonija child (one born not from the womb). This child, an incarnation of Shiva and Parvati, had three breasts and fish-shaped eyes and smelled like a fish. It was said that the abnormalities would dissappear when she met her rightful man. The child was named Meenakshi - Meen meaning 'fish' and akshi meaning 'eyes'. After her father's death she took the reigns of power and was cured of her ailments the moment she met Lord Shiva or Sundareshwara (the Beautiful Almighty). In their marriage the Lord entertained his guests with the mighty Chidambaram or the cosmic dance. The pair thus became another insignia of of Shiv-Shakti mythology.

The Structure
The majestic shrine of Lord Shiva, measuring 254 by 237 mt. lies at the centre of the temple complex. Nine gopurams (monumental sclupted gateways), each 200 ft high, circumvents the temple precincts. The tallest spire is 60 mt and had the designation of the tallest of its kind in entire Asia for a long time. The temple has a thousand pillared hall with 985 beautifully scultured pillars which are tourist favorite. The shrine was expanded by emperors of the Vijaynagara dynasty during the late 16th Century and it took about 120 years to complete.

The ritual dominance of the goddess developed much later and today tourists flock this place seeking blessings and partake in the legion of festivals that take place almost round the year. The power of Shiv-Shakti is something so predominantly felt in the temple precincts that many believe that a visit to the temple brings luck to the newly married.

Don't miss these out....
» Vandiyur Mariamman Teppakulam - A famous South Indian temple with Lord Vigneswara as the presiding deity. The temple hosts the Annual Float Festival in the months of January/ February.

» Thirupparankundram - About 6 km southwest of Madurai is one of the six dwellings of Lord Subramanyam and is famous for its cave and rock cut temple built by the Pandyas in the 8th century.

» Tirumalai Nayak Palace - An Indo-Saracenic building built in 1523 features the architectural works of the Nayaks and gives an insight into ancient Tamil history.

Accessibility
Madurai airport has flights to all major metros like Chennai, Mumbai etc. The railway station connects with all the major South Indian cities. And if you are planning to take drive, Madurai is 472 km from Chennai, 232 km from Kanyakumari, 446 km from Bangalore and 1454 km from Mumbai.