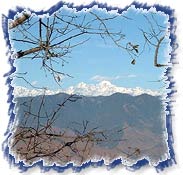 Located in the Garhwal hills at 6,578 ft, on a ridge 34 km north of Dehradun, Mussoorie is a land of immense natural beauty. Once a favourite outpost of the British, Mussoorie was famously called the 'Queen of the Hills'. The times have changed and the British have long since left India but Mussoorie's popularity has not faded. Its sylvan valleys, majestic mountains, pure, invigorating air, sulphur springs and panoramic views draw visitors to its embrace from far and wide.

The journey to Mussoorie starts in earnest once you are on the 34 km drive up from Dehra, steep winding roads, with innumerable hairpin bends are quite exhilarating. The uphill climb allows one to witness a dramatic change in scenery, the sal trees give way to oak and pine and the air acquires a palpable nip, the valley below spreads out in a chequered play of grey and green. Along with its verdant beauty, Mussoorie also offers an exciting range of activities to its visitors. From horseback riding through pristine mountain trails to hiking, boating and even a wide variety of video game parlours and an amusement park for children, Mussoorie has something to see and do for people of all ages and interests.

Attractions
The tourists love to promenade along the Mall, relax in plush hotels, drive out to the Deodar laden Dhanaulti or picnic at the gorgeous Kempty falls. Getting photographed in a variety of costumes at the Gun Hill, visiting ice cream parlours and video game shops are just some of its many well loved pastimes. 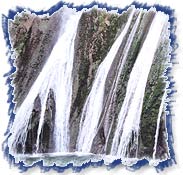 15 Kms from Mussoorie, these gushing falls are set amidst the picturesque surroundings of high mountain ranges, these pretty falls cascade down from an altitude of 4,500 feet and split further into five small cascades. The tumbling water and its fine spray creates a mist over the lake into which it falls, the lake is a popular swimming spot for tourists and a dip in these cool waters surrounded by lush greenery is a delightful experience.

Lal Tibba
The Lal Tibba has the distinction of being the highest peak in Mussoorie. The first houses built by the Britishers in Mussoorie were constructed on this hill. Still inhabited by the locals, it contains some gorgeous old bungalows, beautiful churches, an ancient cemetery and a rich historical legacy of the colonial past. A horse ride up the hill offers panoramic views of the snow covered peaks of the Himalayas up ahead.

Gun Hill
The second highest peak of Mussoorie and its most popular the Gun Hill overlooks some of the highest Himalayan ranges namely Bunderpunch, Srikantha, Pithwara and the Gangotri cluster. This point also provides a bird's eye view of Mussoorie's little town and the Doon Valley spread out below. The adventurous can walk upto the hill while the rest can take the equally thrilling 400 m ropeway ride to land at this vantage point. A small market atop the hill includes various eateries, video game parlours, and stores that rent out elaborate Gharwali costumes in which one could get photographed.

Mussoorie's other attractions include the curvy Camel's Back road, the Algar River, Happy Valley, Tibetan Temple, Hathi Paon and the various walks through its many slopes laden with rhododendrons and clad in Deodars.

Climate
Mussoorie has a pleasant and cool climate for most part of the year, however winter can get very cold with light snowfall in December and January. The rains between June and August are best avoided. After the rains however the hills are at their verdant best, fresh and green and flowers and shoots sprouting everywhere make October to early December and again March to June the best times to visit.

Getting There
Air - The Jolly Grant in Dehradun is the nearest Airport. At a distance of 58 kms from Mussoorie, it takes about one and a half hours to drive all the way up. Taxis from the airport to Mussoorie are easily available and cost Rs 1000 approximately.

Rail - The nearest railway station again is in Dehradun, 34 kms and a one hour drive away. Taxis charge Rs 400 to take you to Mussoorie in an hour.

Road - Good motorable roads and a variety of buses and taxis ferry people to and fro from Mussoorie. Much of the vehicular traffic comes through and from Delhi, it's 6 hours from here via sugarcane and mango plantations.