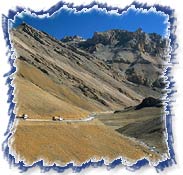 Ladakh gets its name from 'La dags' - land of the high mountain passes. This mystical land is set amidst towering peaks of four majestic mountain ranges - the great Himalayas, Zanskar, Ladakh and the Karakoram. For a few months each year Ladakh gets sealed into a wintry cocoon when snow fills the passes and blocks access. Its isolation perhaps has been its blessing as it has kept a centuries old culture and some of the most unique traditions alive. Ladakh is also the highest inhabited region in India and the aquamarine waters of the river Indus and its tributaries slice their way through the ranges.

A truly spectacular land, Ladakh is hauntingly beautiful, with lakes and rivers, valleys and vistas of snow crested peaks, clear mountain air, tall poplars and tumbling willows, fortress-like monasteries, colourful prayer flags standing tall in declaration of an exotic culture, the warmth of its people in stark contrast to its cold weather and the many opportunities that it offers each visitor. This high altitude plateau at India's furthest frontier is bordered by Pakistan occupied Kashmir, Tibet and China on different sides. To the west is kashmir and to the south Himachal Pradesh. The culture of Ladakh is shaped enormously by the two prominent religions of this hill town; Buddhism and Islam have equally large followings and a great many Tibetan and even some Chinese immigrants add to the cultural milieu.

Attractions
Leh
The capital city of Ladakh, Leh is the epicentre of this province. Here crumbling old monasteries provide a dramatic backdrop to its many cafes, restaurants, bars, carpet and curio shops and trekking and rafting agencies. Colourful prayer flags are strewn across pillars and posts. Monks, Ladhaki traders and Tibetan refugees jostle with tourists from all across the world at its exotic bazaars and a laid back feeling creates a relaxed atmosphere. Chants can be heard drifting on the winds and a walk around the old quarters take one back to a place that exists unchanged since centuries. 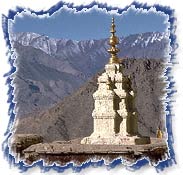 The city of Leh is dominated by the imposing 9-storey Palace of Sengge 'Lion' Namgyal. Walk through its dark passages and ascend to the top floors for panoramic views of the Indus valley below.

Tsemo Gompa
Walk further beyond the palace and you will come across the Tsemo Gompa or monastery. This monastery also contains a three story high solid gold statue of the Maitreya Buddha (the future Buddha also known as the laughing Buddha)

Many Monastries
Leh has the largest concentration of Buddhist monasteries or Gompas. Southeast of the city along the Indus are the monastries of Shey, Thiksey, Hemis, Stakna, Matho and the Stok Palace.

Lamayuru
It is the oldest monastery of Ladakh and therefore worth a visit. Situated on the spectacularly beautiful Leh-Kargil Road, it is 120 kms west of Leh. It is also known as the Yung-drung or the Swastika.

Rafting on the Indus
Amidst these gorgeous surrounds, float down the Indus between Phey and Nimoo. The rapids are mild and gentle enough even for beginners.

High Altitude Lakes
The two aqua marine lakes called the Tso Moriri and Pangong Tso are truly incredible. Home to some interesting high altitude wildlife and a huge attraction for the bird population, visitors are well advised to take their binoculars along. 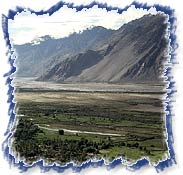 This valley offers unparalleled views of the Shyok river, cutting across the land like a silver ribbon. This 'Valley of Flowers' lies between the Ladakh range and the Karakoram, and is an important landmark as it once lay on the ancient silk route through which caravans passed into China.

Sightseeing and Adventure Options :
Climate
Ladakh falls under the rain shadow area of the Himalayas due to which it receives very little rainfall, this area is also known as the cold desert. The climate in Ladakh is extremely cold in winter and the sun's effect is harsher due to the rarefied air. You could therefore suffer from conditions as diverse as frostbite and sunburn at the same time, if you're not well protected. Temperatures in Ladakh, range from -3 to 30 degrees Celsius in summer and from -40 to 15 degrees Celsius in winter. The summer months from June to September are the best time to visit here.

To cope with the climate in Ladakh, you should carry windcheaters, woollen clothing, thick socks, gloves, scarves, a hat or woollen cap, sturdy boots or walking shoes, sunscreen, lip balm and goggles.

Getting There
Air - The nearest airport is at Leh. Alliance Air flights connect Leh with Delhi, Chandigarh, Jammu and Srinagar.

Rail - Jammu (620 Kms) is the nearest railhead. It is connected to major cities and towns of India.

Road - Ladakh is well connected by surface network with major cities like Srinagar, Leh, Kargil, Manali and Keylong. There are two land routes into Leh, one by the road from Srinagar and the other from Manali in Himachal Pradesh. The Srinagar-Leh Road usually remains open from June till October. The Manali-Leh Road is open from July to September. Private bus operators as well as as the state road transport service run frequent buses on these routes.