Mysore is the erstwhile capital of Wodeyars, the rulers of Mysore State. The Wodeyar family ruled Mysore since 14th century except for a short period of 40 years when Hyder Ali and Tipu Sultan were the rulers. Today Mysore is one of the major cities of Karnataka. Mysore has emerged as a thriving market for exotic sandalwood & incense, the Mysore silk sarees and stone-carved sculptures.

Mysore is certainly a charming, old-fashioned and undaunting town dominated by the spectacular Maharaja's Palace, around which the boulevards of the city radiate. Nearby is the city centre with the colourful and frenetic Devaraja Market is inviting a stroll. 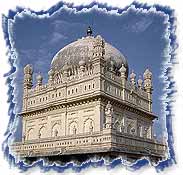 On the outskirts of Mysore, Srirangapatnam still harbours architectural gems from the days of the great Indian hero, Tipu Sultan, and the magnificent Hoysala temple of Somnathpur lies little more than an hour's drive away.


Legend :
In the tenth century Mysore was known as "Mahishur", the town where the buffalo-demon Mahishashur was slain by the goddess Durga. The word Mysore expands to "Mahishasurana Ooru", which means the town of Mahishasura. It is believed that during one of the wars between devils and demons on the one hand and gods and goddesses on the other, the demon Mahishasur (Mahishur) overpowered the gods.

The goddess on seeing this, incarnated as the fireceful Chamundi or Chamundeshwari and consequently, Mahishasura was killed by Her atop the Chamundi Hill near Mysore. Ever since, the Mysore royal family has worshipped Chamundeshwari as the palace deity. Hills dedicated to Her stand at the eastern end of Mysore town to this day.