Area : 5.12 sq km
Population : 2,500(approx.)
Famous as the "valley of the Gods", Manali is an important hill station of northern india. It is the destination of thousands of tourists every year. Its cool atmosphere provides a perfect haven for the ones afflicted by the hot Indian summers. Besides offering quite a few places for sightseeing, Manali is also famous for adventure sports like skiing, hiking, mountaineering, paragliding, rafting, trekking, kayaking, and mountain biking.


Places to see :
The most visited site in Manali is the Hidimba or Dhungri Temple. Dated 1533, this temple is dedicated to the local deity Hidimba, wife of the Pandava prince, Bhim. The temple is noted for its four-storeyed pagoda and exquisite wooden carvings. A major festival is held here in the month of May. 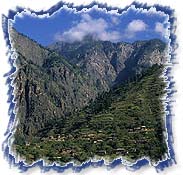 Manali also attracts tourists with its shiny gompas or Buddhist monasteries. The Gadhan Thekchhokling Gompa, built in 1969, is most famous. The monastery is maintained by donations from the local community and through the sale of hand-woven carpets in the temple workshop. The smaller and more modern Himalayan Nyingamapa Gompa stands nearer the bazaar, in a garden blooming with sunflowers. The Museum of Traditional Himachal Culture, near the Hidimba temple, is worth a visit.


How to reach :
» By Air - The nearest airport is Bhuntar, 52 km south of Manali. There are flights to Delhi via Shimla.

» By Road - Manali is well connected by road. By road, the distance from Delhi via Mandi is 585 km, and from Shimla the distance is 270 km.

The capital city of Himachal Pradesh, Shimla is a quaint little hill station nestled in the Shivalik hills. The city derives its name from the name of Goddess Kali, Shyamala. It was discovered by the British for a perfect escape from the scorching heat of the plains. Shimla offers the picturesque set of its treasured natural gifts to its tourists, such as, pine clad hills, beautiful valleys and waterfalls. Shimla has its own colonial charm too.


Places to see :
» The Mall - The mall that runs along the Ridge is the hub of Shimla. It is always crowded with tourists. It is the city's most famous shopping center, with shops selling all items, from clothes to junk food.

» Rashtrapati Niwas - This six-storeyed Vice-Regal Lodge ( now Rashtrapati Niwas) was built in 1888 and was formerly the residence of Lord Dufferin, the British Viceroy. The style of architecture is English Renaissance and it has magnificent lawns. It presently houses the Indian Institute of Advanced Study. 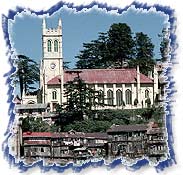 » Scandal Point - it is the State Museum of Shimla. built in 1974, it has a good collection of statues, miniatures, coins and photos from in and around Himachal Pradesh. a statue of the national leader Lala Lajpat Rai has been erected here.


How to reach :
» By Air - The airport at Shimla, 22 km from the main city, has flights to Delhi and Kullu. Chandigarh airport is also nearby.

» By Rail - Kalka Railway station is the nearest broad gauge station. Meter gauge train plays in between Kalka and Shimla.

» By Road - Shimla can be reached conveniently by road through all India tourist permit vehicles. As located on the hills, the driver of the vehicle should be trained.