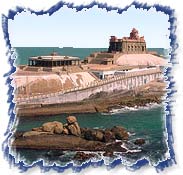 Down south at the tip of the nation is Kanyakumari, the Cape Comorin of the British era. Rocky and treacherous with a turbulent sea challenging the manmade wall running along it, the beach is one of its kind. Add to it the confluence of the three water bodies - the Arabian Sea, the Bay of Bengal and the Indian Ocean - called the Thriveni Sangamam. Even the sand here is an enmesh of colors - a mesmeric replica of the sublime confluence of waters that create havoc on its shores. Anytime is good time to visit Kanyakumari. But winters, between October and March, is the best time to pack your bags for Kanyakumari.

The Beach With A Difference
The Rock - This is not one of the regular languid sun-basking beach. The riotous waves create simultaneous ripples in the heart as they dash against the rocks and leave you drenched. Two of these rocks reach out of the ocean. At one of these, Sri Padaparai is said to bear the footprints of the virgin goddess and Swami Vivekananda is said to have sit in deep meditation here. This, tagged the Vivekananda Rock, became the site for the Vivekananda Rock Memorial built in 1970, a major tourist attraction of India. The tranquility the place commands amidst the sound of the tumultuous waves is fascinating. The meditation centre is justly located. Another site houses the Gandhi Memorial where the Mahatma's ashes were kept before immersion in the Sangam. 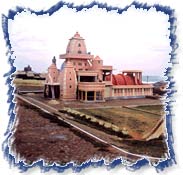 The Kanyakumari Temple - Locally called the Kumari Amman, the temple is a Shakti Peetha that enshrines Goddess Parvati, whose glistering diamond nose-ring is said to catch the attention of sea-farers even from far.

Sun's Antics - Kanyakumari boasts of world's most spellbinding sun sets and sun rises. The beach lighthouse can be an ideal place to replenish the sight.

Flitting Around
Just 6 km away, at Vattakottai or the 18th century Circular Fort, is an exciting destination for holidaymakers. About 19 km away is Nagercoil housing the Nagaraja or the Serpent God's Temple where the sand from the spot is given as prasadam. The Thiruparappu Waterfalls are 60 km away and has a majestic architectural temple replete with paintings. Muttam at 32 km from Kanyakumari is an enthralling beach with a tall lighthouse. Kalakkadu and Mundanthurai are two wildlife sanctuaries in case you are also planning some wildlife photography.

Reaching Kanyakumari
The nearest airport is in Thiruvananthapuram, 87 km away. Kanyakumari is well-connected with all places by rail and road. Local transport is bus, auto rickshaw and taxi. And if you have opted for one of our tours, your conveyance is taken care of.

Accommodation
We take care that the best accommodation options are made available to you. There are hotels to suit every pocket.