About the City
Bhubaneswar, the capital city of Orissa, has to its credit a huge total of 500 temples even today. Known as the 'Temple City of India', it was once home to around 7,000 such shrines. A dozen out of 500 reflect the brilliance of the Orissan style of architecture. What is most interesting is the fact that these temples, dominating the city skyline, are located within reasonable walking distance from one another.


Climate Check
Summers are hot with temperature reaching a maximum of 40 degrees centigrade. Winters, however, are pleasant with temperature hovering around 16 degrees. October to March is the ideal time to visit this city of temples. 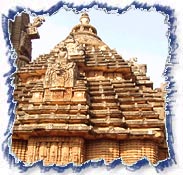 Lingaraj Temple
The 54-metre-high spire of the temple dominates the Bhubaneswar landscape. Dedicated to Lord Lingaraj (Shiva), the temple is set in a walled compound, with the Lingaraj being surrounded by many smaller shrines. During February/ March, the Shivratri festival is celebrated here with great fervour, pulling in thousands of pilgrims from all across the country.

Parsuramesvera Temple
The Parsurameswara Temple, one of the oldest in Bhubaneswar, has a history dating back to the 7th century. The temple occupies a position close to the main Bhubaneswar-Puri road. This best preserved ancient temple has elaborate bas reliefs of elephant/ horse processions and Shiva images.

Mukteswar Temple
Lying close to the Prsuramesvera Temple, this 10th century temple is like a gem in the rich tapestry of Orissan architectural history. Particularly interesting are the beautiful carvings of dwarfs. Figures of female warriors, maids, elephants and monkeys can be observed on the walls of the temple. A large green temple tank within the premises of the temple is yet another attraction here. 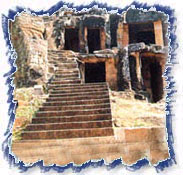 Khandagiri & Udayagiri Caves
These Jain caves, belonging to the 2nd century BC, are a window to the life and times of the Jain ascetics. They give an idea of the development of the sculptural art in the 2nd century. Khandagiri has to its credit 19 caves while Udaigiri has a total of 44.


Reaching
The Bhubaneswar Airport (3 km from city centre) connects the city to almost all the major destinations of the country. There are regular flights to Delhi, Kolkata, Vishakhapatnam, Nagpur, Hyderabad, Chennai and Mumbai. The railway station is located in the heart of city and there are a number of superfast trains connecting the city to different parts of the country.