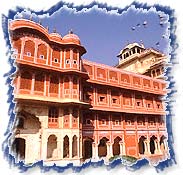 A classic fusion of the Mughal and Rajasthani architecture is the City Palace of Jaipur - the seat of power of the mighty Rajputs that lorded the deserts once. The palace complex, divided into courtyards and well-manicured gardens, is interspersed with a swarm of palatial structures like the Chandra Mahal, Mubarak Mahal, Badal Mahal, Shri Govind Dev Temple and the City Palace Museum - making it an ideal tourist purlieu.

The History of City Palace of Jaipur
Rajput Maharaja of the Kachhwaha clan, Jai Singh II, built this majestic palace encompassing one-seventh of the walled Pink City - Jaipur. The Maharajah and his predecessors administered their domain from here. The Diwan-i-Khas and the Diwan-i-Am - the erstwhile houses of parliament - clearly echo the influence of the Mughal dynasty. The palace was recently in the Guiness Book of World Records for housing the two largest vessels in the world originally used to carry water from the Ganges for the personal use of the royality. The exquisite Afghan and Persian carpets, miniature paintings, astronomical manuscripts in Persian and Sanskrit in the Diwan-i-Aam or House of Public Audience, is reminiscent of the rich cultural transfusion that the era hosted. The Museum at the Chandra Mahal boasts of a priceless display of 15th century war-munitions, paintings of Rajasthani, persian and Mughal schools and costumes of former rulers of Jaipur.

The Structure
The entire courtyard sweep has palaces made by Jai Singh's predecessors. The trail begins with the Mubarak Mahal or the Auspicious Palace built by Maharaja Madho Singh II. The seven-storeyed Chandra Mahal or the Moon Palace overlooking the city and its decorous gardens is the present Maharajah Bhavani Singh's abode. The Sukh Nivas or the Hall of Rest with its regal drawing and room, Shobha Nivas or the Hall of Beauty with its intricate mirror and blue-tiled wall decorations that dazzle in the nights, the Chhavi Nivas or the Hall of Images with a polished floor of eggshell stucco, the uppermost storey Mukut Mahal or the Crown Palace - all take visitors to a bygone era of grandeur and magnificience so typically Indian. Bang opposite of the Chandra Mahal is the Badal Mahal or the Palace of the Clouds. The expanse in between is adorned by the Govind Devji Temple and the boisterous chain of fountain. The Hawa Mahal, the most famous of them all, stands a few yards away from the City Palace.

A visit is a must if you are looking for exciting forays into India's historical past.

Don't Miss these out 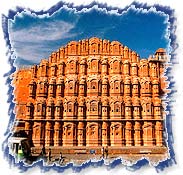 » Jaigarh Fort - The Jaigarh or the Fort of Victory was built to protect the royal treasury. A walk through the interiors and the museum will transport you ages backwards to the period of the Maharajahs.

» Hawa Mahal - A fantastic screen-like monument originally built as an extension of the ladies Zanana (private chambers) so that they can have an excellent view of the city and its activities from their cloistered refuge. The ventilation strategy is architecture par excellence.

» Jantar Mantar - An architechtural miracle built by Maharaja Jai Singh in India's 'Pink City' - Jaipur. Within its tall walls is enclosed a world of scientific secrets for the visitors to come and unravel.

» Amber Fort -A magnificient must-visit tourist destination built in white marble and red sandstone in the reign of Raja Man Singh, Commander in Chief of Akbar's army. Foregrounded by the beautiful Maotha Lake, it was reputed for being the treasure vault of the Kacchwaha rulers.

Accessibility
The well connected airport, Sanganer, is 15 km from the city. The rail junction has all the major trains, including the tourist heart-throb Palace On Wheels that starts from Delhi every Wednesday. Delhi at 262 km has regular luxury and budget buses to Jaipur.