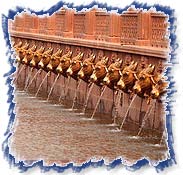 The Akshardham Temple is the latest addition to the Indian capital's architectural diaspora. Built on the banks of the river Yamuna across a 100 acres of plush lawns, this 2 billion architectural grandeur is an initiative of the Bochasanvasi Aksharpurushottam Swaminarayan Sanstha (BAPS). The temple structure, inspired by the Akshardham Temple of Gujarat, is replete with about a majestic 11 ft statue of Lord Swaminarayan and 20,000 other statues, an IMAX theatre, a Swaminarayan temple, artificial lake and an elaborate musical fountain.

Swaminarayan Akshardham Legacy
At 85, Swami Narayan Maharaj - a follower of a 17th century reformer Swaminarayan - the leader of BAPS, is leading this socio-spiritual charitable NGO affiliated with the United Nations. Over 9 thousand centers, 750 sadhus or monks, 55,000 volunteers, million followers or more and the Akshardham temples are hewn across the globe in London, Houston Texas, Chicago Illinois, Atlanta, Georgia, Los Angeles, California, Toronto, Canada and Nairobi Africa.

The Structure
Akshardham is built of pink Rajasthani sandstone and Italian marble. Its plethora of intricately carved gods and goddesses makes it the largest hand-carved structure in the world. The Yogi Hraday Kamal is a lotus-shaped (when viewed from above) garden hewn with large stones having quote engravings of Shakespeare, Martin Luther, Swami Vivekananda to Swaminarayan himself. The life of the saint and his preachings are depicted in the legion of museums with hi-tech instrumentations like robotics, dioramas, Delhi's first and only large format screen and what not. Don't miss out the third hall where visitors can board beatific peacock boats and sail in the artificial lake through the 10,000 years of Indian history. India's largest step well, Yagnapurush Kund takes you into the deep crevasse where a musical fountain awaits you mesmerizing lights.

The power of ancient beliefs aggrandized with modern technology is what this magnanimous structure stands for. Inaugurated only in 2005, our tour parcels include a trip to this spectacular emblem of religion and modernism. 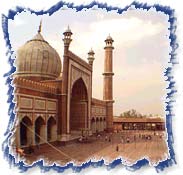 » Red Fort - The erstwhile abode of the Mughal Royality, the Red Fort is an insignia of India's sovereignty. It is from the premises of this walled recluse that the Prime Minister addresses the nation every year on the Independence Day.

» Jama Masjid - A few yards away from the Red Fort is the Jama Masjid - the world's largest mosque. Built in white marble, this majestic House of Prayers stands proud and singular in the busy streets of Chandni Chowk.

» Humayun's Tomb - One of the firsts amongst the monuments of Mughal architecture in India, this antique tomb was built by Hamida Banu Begum, Humayun's widow. An exquisite garden connived in a special Mughal Garden style called Chahr Bagh, that took 8 years to complete, adorns its premises.

Accessibility
Delhi has both domestic and international airports with excellent connectivity, being the Indian capital. Same goes for roads and railways. Akshardham is located towards the East of Delhi and is easily accessible through DTC buses and cabs.