About the Place
A chief pilgrimage centre of the Hindus, the tiny town of Pushkar lies on edge of the Thar Desert, 132 km away from Jaipur. The town is privileged to be home to the only Brahma Temple in the world. According to the Hindu mythology, the all-popular Pushkar Lake, on the banks of which the town lies, is the place where Lord Brahma performed Yagna (A fire sacrifice). The town is beautifully surrounded by hills on three sides and sand dunes on the fourth- a perfect backdrop to the annual religious and cattle fair.


Climate Check
Pushkar faces extremes of temperature with high climatic variations between the seasons. Summers are hot while nights are chilly. During the winters, temperature remains around 10 degrees centigrade. September to March is the best time to pay a visit to Pushkar. 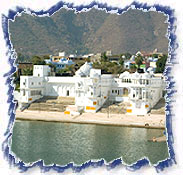 Brahma Temple
The main attraction in Pushkar, the Brahma Temple is the only place where Lord Brahma is worshipped. Having a significant position in the Hindu pantheon, the temple enshrines a full size four-armed idol of Lord Brahma.

Pushkar Lake
Besides the only Brahma Temple, the Pushkar Lake is the another revered site, attracting hordes of pilgrims from all across the country. And the lake is no small thing, for a dip in the waters here is considered to wash away all the sins of the past. Once there the scene around the lake will be proof to all of it.

Savitri Temple
Perched atop the Ratnagiri Hill, the Savitri Temple stands in dedication to Savitri, the wife of Lord Brahma. Legend has it that as Lord Brahma performed Yagna with a local milkmaid Gayitri, an enraged Savitri cursed him that he would never be worshipped anywhere except in Pushkar.

Pushkar Bazaar
Take a stroll through the bustling Pushkar Bazaar to have your picks from a huge range of souvenirs, Rajasthani costumes, jewellery, embroidered fabrics and other decorative items. The bazaar becomes a hotspot during the Annual Pushkar Fair. 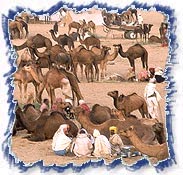 It actually the famed Pushkar Fair that gets Pushkar on the international travel map. Held every year during the month of November, the fair sees a huge number of people from all around. Pilgrims can be seen taking their sacred dips into the Pushkar Lake. The largest camel fair in the world is organised at the same time.


Reaching Options
Jaipur, 132 km from Pushkar, is the closest airport from here. There are regular flight services from here to cities like Delhi, Mumbai, Udaipur, Jodhpur, Ahmedabad and Aurangabad. Ajmer is the nearest railhead. By road too, Pushkar has good motorable links, with Ajmer lying at a distance of just 14 km. Daulatabad Bus Stand in Ajmer has buses leaving for the key destinations in and outside Rajasthan.