About the Place
Lying at the confluence of the Indian Ocean, the Arabian Sea and the Bay of Bengal, Kanyakumari marks the southern end of the Indian subcontinent. Firstly, the scenic location and secondly the phenomenal sights of the sunrises and the sunsets over the miraculous waters magnetise tourists and travellers from far and wide. One of the most attractive features of the place is the location of a splendid monument out in the sea dedicated to Swami Vivekananda, 400 m from the shore. The monument to the Bengali religious leader and social performer stands on a rocky islet, a sight to behold.


Climate Check
Kanyakumari, due to its proximity to the sea, enjoys a pleasant climate and can be a round-the-year destination for the tourists. During the summers the maximum temperature records 35 degrees centigrade, while the minimum during the winters is around 22 degrees centigrade. 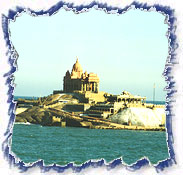 Kanyakumari Beach
One of its type, the Kanyakumari beach is best visited between the months of October to March. Sri Padaparai Rock, Swami Vivekananda Rock and the Kanyakumari Temple are the highlights here.

Vivekananda's Rock
Named after the Bengali social reformer Swami Vivekananda, the Vivekananda's rock is a major attraction at Kanyakumari. Rising out of the sea, the massive rock is believed to be the site where the swami meditated. The rock houses a statute of Vivekananda, attracting a good number of swami's followers.

Sangam or Confluence
Sangam is the point where the three massive water bodies- the Arabian Sea, the Indian Ocean and the Bay of Bengal- converge. The bathing ghat is popular with the tourists. People can be seen jumping and bathing here.

Lighthouse
Scan the surrounding areas by having a panoramic view from upon the lighthouse. This lighthouse is no less attraction for the tourists.

Sunrises & Sunsets
Apart from its other attractions, Kanyakumari is also appreciated for the wonderful views of sunsets and sunrises that it offers. Don't fail to have the experience.