The Hyderabad city is cosmopolitan, and is richly endowed with a variety of cultures. While Muslim people are concentrated more towards the old city like Charminar, Secunderabad has got a more contemporary look with a concentration of Anglo-Indians. The city of Hyderabad presents an attractive amalgam of old world charm together with the ebullience of growth and enterprise. Beautiful old edifices built in the medieval, Mughal, Colonial and Indo-Saracenic styles abound, rubbing shoulders with large glass and chrome temples of commerce. 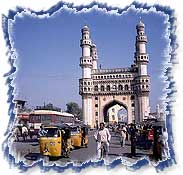 » Charminar - Charminar is a majestic architectural monument standing at the heart of the old city of Hyderabad, built by Mohammad Quli Qutub Shah in 1591 supposedly to commemorate the eradication of plague from Hyderabad.

» Golconda Fort - Golconda fort is a majestic monument, which lies on the western outskirts of Hyderabad city. It speaks of a great cultural heritage of 400 years and is regarded as a place worth visiting.

» Mecca Masjid - Mecca Masjid is one of the largest mosques in India accommodating upto 10,000 worshippers. This is the biggest mosque in Hyderabad and lies within hundred yards to the southwest of Charminar.

» Hussain Sagar - Hussain Sagar is a large lake in the midst of the city and was constructed in 1562 AD. Also known as Tank Bund, it connects the twin cities of Hyderabad and Secunderabad.


Excursions from Hyderabad :
» Hyderabad Film City - It is one of the most comprehensive and professionally planned film production centre in the world. Located at an hour's distance from Hyderabad, it is spread over an area of more than 1000 acres.

» Osman Sagar - 20-km away from the center of Hyderabad is Osman Sagar. Popularly known as 'Gandipet', it is an excellent picnic spot with well-laid gardens. 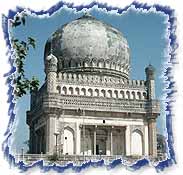 » Shilparamam - Shilparamam is a crafts village at Madhapur, set amidst lovely rocks, rippling waterfalls and gorgeous lawns, about 14-km from Hyderabad.

» Ocean Park - Located at Gandipet in Hyderabad, Ocean Park is one of the first theme parks started in the twin-cities. It is a unique amusement park for the entire family and has attractions like a kiddie's pool, a 60ft high ride, the Slam Bomb, bumping cars and dry rides for people of all ages.


How to reach Hyderabad :
Hyderabad - An important centre in the air transport network of south India is well connected with domestic and international airlines. Hyderabad, being the capital city of Andhra Pradesh, has excellant road services to adjoining states and has a strong rail network with all major cities of