Golden temple, is a Sikh temple and as the name suggests it's a serene tour package for the devotional and the peace lovers. Learn to know more about the Sikh principles and the lives of the great Gurus who taught humanity and justice to the world, as you pass through some of the best Gurudwara and sacred pools of Punjab. This is the best Sikh pilgrimage tour one can have in India, offering only the best options for every tourist at a hurry. The package includes the best Delhi and Amritsar Gurudwaras, and not to forget, the Golden temple that is universally accepted as a hallmark of religious buildings. 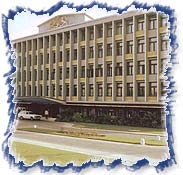 Day 03 : Chandigarh - Amritsar
Morning sightseeing tour of Chandigarh, visiting the Museum, High Court, Assembly Chamber and Rock Garden. Afternoon drive to Amrltsar (250 kms/06.50 hrs), situated on the north -western border of the country. The 400 years old city, founded by the fourth guru of the Sikhs, Guru Ramdas , has been the seat of the Sikh religion and culture from its very inception. It is renowned for the famous Golden Temple. Amritsar, literally -'Pool of Nectar' derives its name from the holy pond around the temple. The land for the pool was gifted by the Moghul Emperor Akbar. Check in at hotel on arrival. Overnight at hotel.

Day 04 : Amritsar - Tarn Taran - Gobindwal - Hazoor Sahib - Amritsar
Morning excursion to Tarn Taran (22 kms / 45 minutes), famous for a gurudwara standing on the side of a large tank and built in honour of Guru Arjun Dev. Lepers come from far -off places to have a dip in the tank, for it is believed that its water can help cure leprosy. Proceed to Gobindwal (23 kms /30 minutes) , a short run from Tarn Taran connected to the memory of Guru Amardas who lived there. A gurudwara built by the Guruji still stands there. Since no place was available for a tank, an underground 'Baoli' was constructed near the gurudwara with a flight of 84 steps leading to it. Continue onto Hazoor Sahib (10 kms / 15 minutes) , where the Samadhi (memorial) of the second Sikh guru, Guru Angad Dev ji , was built by Maharaja Ranjit Singh in 1815. Return to Amritsar. Afternoon visit the Golden Temple - built in the midst of the holy pool by Maharaja Ranjit Singh in 1803. It is also known as Darbar Sahib or Har Mandir Sahib. The dome of the temple is covered with an estimated 400 kgs of gold leaf, hence its popular name the 'Golden Temple'. The interiors of the temple, like wise, decorated by inlay work with delicate floral patterns are done with semi precious stones. Adjoining the pool is Akal Takht , established by the sixth Sikh guru, Guru Hargobind Singh. It is seat of the supreme head of the Sikh religious authority. Overnight at hotel. 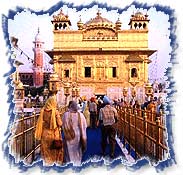 Morning visit Jailianwala Bagh ( 24 kms / 45 minutes) , the historic site where hundreds of innocent Indian men, women and children were massacred by British General Michael Dyer on April 13 , 1919. A memorial and garden have been created here as a national monument. Proceed to Baba Bakala ( 21 kms / 45 minutes) , a place associated with ninth Sikh Guru, Shri Tegh Bahadur, having a magnificent gurudwara where people gather in thousands on every "Amavas". An annual fair is held on Raksha Bandhan with about hundred thousand people visiting the place, commemorating the day when the ninth guru was located by his followers. Drive to Waga Border and watch parade and closing of border for the day. Return to Amritsar. Overnight at hotel.

Day 07 : Delhi - Back Home
Morning half day sightseeing tour, visiting Red Fort -the symbol of Mughal power and elegance built in red sand stone by the fifth Mughal Emperor Shah Jahan when he shifted his capital to Shahjahanabad from Agra in 1638, India Gate -the country's memorial to the Unknown Soldier died in world war-II and Quatab Minar -built in red sand stone in Islamic style, the tower is 71 mts tall with its walls consisting of intricately carved quotations from the Holy Quran. Check out at 1200 hours. Transfer to airport to connect flight for onward journey. End of our services.