Location of Chennai :
Chennai has the Bay of Bengal bordering its east, while the state of Andhra Pradesh is on its northwest. It has the Kanchipuram on its south and the states of Kerala and Karnataka on its western side.

Chennai, previously called Madras, is comparatively a new city, about 350 years old. The erstwhile villages of Mylapore, Triplicane, Ezhambur (Egmore), etc., all now a part of Chennai, have a recorded historical past centuries older than Chennai. Chennai is a gracious city that has a clear skyline, long sandy beaches, parks, historic landmarks and tourist infrastructural facilities which make it a convenient travel point or base to start a tour of Tamil Nadu and South India. 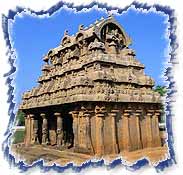 » Marina Beach - Golden sand, good surf and a shimmering clean blue sea; this in a nutshell is Marina beach. This beach is counted among one of the longest beaches in Asia.


Excursions from Chennai City :
» MGR Film City - Known to the world over for its film industry, MGR Film City is a special delight, which houses various locations and settings for film shootings besides dubbing and re-recording theatres.


» Covelong Beach- Located 40 km from Chennai, Covelong is a beautiful beach with a number of historical monuments around it. The Dutch Fort and the Catholic church are amongst them.

» Mahabalipuram - Located at a distance of 58 km from Chennai, Mahabalipuram has everything that makes a site memorable; tradition, history, piety, western annals, and current importance as a centre of tourism.

» Crocodile Bank - Located 42-m from Chennai is a farm where several species of Indian and African crocodiles and alligators are bred in captivity. This crocodile bank is on the way to Mahabalipuram and is run by Romulve Whittaker.

» Tirupati - 84-km from Chennai at the extreme south of Andhra Pradesh is Tirupati, one of the most important pilgrimage centres of India.


How to reach Chennai : 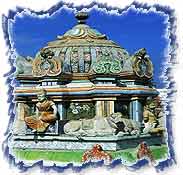 Chennai, is an international arrivel point and is well connected by Air from all the major national and international cities around the world. Regular train services also connect Chennai (Madras) directly with all the major cities and National Highway connect the city with excelllant road network from other capitals and major tourist places in India.