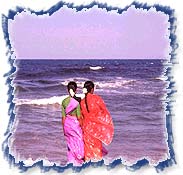 Here is the longest of them all....! Welcome to the Marina beach! And do the appellations - whether it is the longest in India or Asia or one of the longest in the world - really matter when our concern is fishing out an exotica among the beaches for you and Marina is just that ? The series of make-overs that went into the making of the tourist heart-throb, Marina, began in the early 1880's when the then Governor of British India Mountstuart Elphinstone Grant Duff took fancy for this beatific coastline, and the rest is history.

Get Crazy At Marina.....
Marina Beach can be a perennial-enjoyment purlieu. Sun-basking and swimming are passe. This time why don't you try riding a stallion on the beach - a classic display of power and speed before the mighty sea. Sea-food, sea-shells, a sandy beach, staring endlessly at the endless expanse of water and what not - Marina beach abounds with options.

Attractions Around The Beach
Mark Of The Legends - The roadside skirting the beach is embellished with a sentinel of statues consisting those of Mahatma Gandhi, local legendary personas like Shivaji Ganesan, Kannagi, Thiruvalluvar, while others with symbolic significance like the Statue of Labour. On one end of the shore is a majestic lighthouse.

Turtles At The Beach - The Neelangarai section of the beach falls under the ambit of conservation efforts for the protection of the endangered Olive Ridley turtle. Lucky ones might get a chance to see them as well, don't forget the camera in awe! 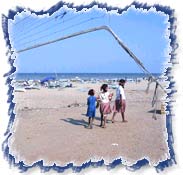 Frolicking Fish - The venue of the Aquarium house near the shore compliments the ambience well. The exotic fishes and the blue waters feel like a slice of the deep sea itself.

Buildings Of Importance - The Presidency College, University of Madras, Senate-House, Chepauk Palace, P.W.D Office and the Ice House are significant buildings around the beach adding an aura of formal decorum to the whole surrounding.

Anna And MGR Samadhis - Situated on the beach are the memorials of the most popular, former Chief ministers of the state - the Anna and MGR Samadhis.

Chennai Must-visits - The entertainment arcade Mayazaal with FEC's, Theme Park, Resort and Sports Village, Vandalur Zoo with its hordes of butterflies besides the wild denizens, the hundred yaer old Maskaan Chavadi or the bird bazaar for bird-rearing enthusiasts, the artificially created shores of the Golden Beach Resort, the Crocodile Bank with hundreds of them basking in the bank, the water park Dash and Splash - to name a few. Go for one of our tour packages if you want to make the best of your vacation.

Reaching Marina Beach
About 20 km from the main city is the Kamaraj Domestic Airport and the Anna International Airport. Chennai Central and Chennai Egmore railway stations are connected by rail with all major towns and cities in India. And if you are travelling by road, you can board one of the many private operators for domestic and interstate transportation. For those planning to drive on their own, Chennai is 334 km from Bangalore, 704 km from Hyderabad and 790 km from Trivandrum.

Stay Back At
Chennai being the capital of Tamil Nadu and a popular tourist destination, be it for sight-seeing or for those coming for treatment to Apollo, has hordes of hotels for every budget and even lodges where you can even cook your own food with the utensils provided. Thousand lights, near Apollo Hospital can be a very economic option. Or forget the hassles, we have the best options stored for you.