Andhra Pradesh, the symbol of true spirit of Indian secularism where people of all faiths - Muslim, Buddhist and Hindu form a symphony of religions. History has forged, and left behind vital links with the state, as is evident from the many edifices, monuments and architectural ruins, the legacy of dynasties as old as 300 B.C. Traces of the diverse and variegated facets of the culture of the Mauryas, Pallavas, Cholas, Satavahanas, Chalukyas and Vijayanagar, offer imposing vistas, that continue to fascinate the observer. Situated south of the Vindhyas, Andhra Pradesh shares a common history with its neighbours, Maharashtra , Orissa , Madhya Pradesh , Tamil Nadu and Karnataka . The medieval city of Hyderabad is its capital.
Andhra Pradesh is known for the famous Sri Venkateswara temple at Tirupati, Charminar, Salar Jung Museum, Golconda Fort in Hyderabad and Buddhist viharas at Nagarjunasagar. Also travel to the wildlife and bird sanctuaries of Kolleru, Manjira, Kawal and Papikonda. Andhra has a nearly 1000 km-coastline with eight of its 23 districts having direct access to the sea. Famous beaches are Visakhapatnam Bheemunipatnam, Kakinada, Chirala, Kalingapatnam and Mypad. 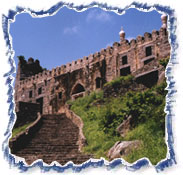 Once a medieval city, Hyderabad is a modern metropolis. A revolution in etiquette is under way, recasting values. The yuppie ethos has invaded the city and western haute couture is slowly being preferred over the sherwani and burqa. This is the city that has even been the home of a Miss World. Fortunately, gourmets have not let the Deccani cuisine, the Hyderabadi biryani in particular, pass into legend.


History of Andhra Pradesh :
Andhra Pradesh was, in fact, created by combining the old princely state of Hyderabad with the Telegu-speaking portions of the former state of Madras . The Chalukyas held sway till the 10th c. when the Cholas seized power. In the 14th c., Muslim power reached this southern state and for centuries ruled over this princely state. It was finally was taken over by a General of the Mughal Emperor, Aurangzeb. The General's successors, called Nizams, ruled the state till Independence.


Culture of Andhra Pradesh :
Beautiful crafts, vibrant religious festivals, a varied cuisine and the sonorant mother tongue, Telugu, are some of the indelible impressions of this state. Kuchipudi is the famous classical dance form of Andhra Pradesh. Tribal dances contribute in equal measure to the artistic heritage of Andhra Pradesh. Tholubommalaata, a shadow puppetry theatre is a fascinating folk art.

Society :
Friendly and warm, the Andhras are an ancient people, who can trace their roots and history to the Mauryan period, an interest in arts, crafts and dance. Andhra Pradesh is also a rich mosaic of cultures. Muslims, Buddhists and Hindus live in relative peace and harmony. The Tirupati is, however, the trump card for the state's tourism industry drawing people from all over the country and worldwide. Donations from Tirupati alone, have led to the establishment of a university, several hospitals & schools. 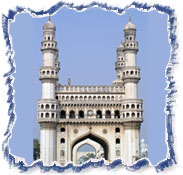 More than 70 per cent of its population live by agriculture, growing rice, other cereals and pulses. The major bulk of India's virginia tobacco crop is grown in Andhrapradesh. Industrial growth has transformed the landscape into precious pits of copper, mica, coal and manganese.


Andhra's Handicrafts :
Lacquer toys, Anakapalli articles, Ikat weaving, Pembarthi Sheet Metal Ware, Nirmal pottery, Bidriwork as well as Gadhwal, Pochampalli and Dharmavaram silk saris are some of the amazing handlooms and handicrafts Andhra Pradesh is renowned for. Durgi, Allagadda and Tirupati are three of the major centers of stone art. Telengana is particularly well known for its folk paintings. Banjara needle craft, Kalamkari, the pen-painted fabrics of Machilipatnam and Kalahasti; Silver Filigree of Karimnagar and Budithi handicraft of Srikakulam are other handicraft specimens.


Festivals of Andhra Pradesh :
The Deccan Festival, with its cultural programmes is celebrated in February. Bakri-Id is celebrated with ritualistic fervor in Andhra Pradesh and in particular, the old city of Hyderabad. The Andhra Ugaadi which heralds the New Year also means a season of mango-pickling and more literary pursuits such as poetry competitions.The state also observes typical indian festivals such as Nag Panchami, Holi, Diwali, Gandhi Jayanti, Mahavir Jayanti and others.