About the City
Amritsar, the centre of the Sikh religion, was founded by Guru Ram Das in the year 1557. Located in the state of Punjab in northwestern India, the city of Amritsar is internationally renowned for the Golden Temple, especially sacred to Sikhs.
This is the very city where the Jalianwala Bagh Massacre took place in 1919, when the British troops fired upon the Indian nationalists. Hundreds of thousands of people were killed. Sikh pilgrims from all over the world travel Amritsar to visit Golden Temple.


Climate Check
Summers are hot with temperature reaching up to a maximum of 34 degrees centigrade. Winters are chilly and the temperature can drop down to a minimum of zero degree.


Travel Attractions in Amritsar
Golden Temple
The Golden Temple is the holiest of the Sikh shrines. It is the most visited travel attraction in Amritsar India. Entering the temple is a serene and majestic experience. The stunning sanctum is flanked burnished marble walkways. 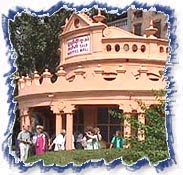 Jalianwala Bagh
The historical monument of Jalianwala Bagh commemorates the mass killing of the Indians during the independence struggle in India. It was in the year 1919 when General Dyer ordered the British to open fire on the Indian Nationalists. The Martyr's Gallery is open from 0900 hours to 1700 hours for visiting.

Baba Atal Rai Tower
The Baba Atal Rai Tower is yet another attractive feature of the city, located at a distance of few kilometres from the main town. It is believed to be the site where Guru Gobind Singh took his last breath. This nine storey structure offers panoramic views of the surrounding areas.

Wagah Border
While at Amritsar, the Wagah border is a not-to-be-missed site. Moving 28 km away from Amritsar takes you to this Wagah, that is located on the Indo-Pakistan border. It's a sight to behold as the Jawans of the Border Security Force change places with great skill and precision.


Amritsari Dhabas
Perhaps, the city of Amritsar leaves none of its people hungry. The Golden Temple authorities arrange regular Langar for the pilgrims and the poor. For tourists and locals there are the all-present Dhabas that serve delightfully delicious and fragrant food at the humblest of prices. Dhabas are the best options to eat at in Amritsar. No wonder, the food is tasty, fresh and clean. Amritsari Kulcha is simply irresistible. Kachauris, mah-ki-dal, muli paratha, thali, gajar ka halwa, jalebis, phirni are the other worth devouring foods of the city. 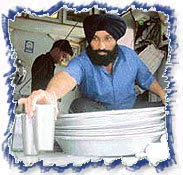 Reaching Options
Travel a distance of 10 km from the city centre to reach the Raja Sansi Airport of Amritsar. There are regular flights to Delhi from here. Amritsar has rail-routes connecting to almost all the major destinations of the country. There are direct trains to Kolkata, Mumbai, Puri and other places. There is fabulous road network as well connecting the city to places like Delhi, Shimla, Chandigarh, Dehradun, Rishikesh, Kullu, Manali and Jammu.