Location : 58-km From Mathura, Uttar Pradesh
Founded By : Badal Singh
Established In : 1475
Main Attractions : Taj Mahal, Agra Fort
There are very few cities in the world that can match the history and heritage of Agra - the city of Taj Mahal. Located at a distance of 204 km south of Delhi, Agra is one of the most famous travel destination of India. Situated on the west bank of River Yamuna, Agra is a part of the great Norther Indian plains. Travel to Agra to explore the architectural splendor of Agra India which is reflected in the glorious monuments of medieval India built by great Mughals who ruled India for more than 300 years.

In the mid 16th century and earlier 17th century Agra witnessed a frenzied building activity and it was during this time when the symbol of love Taj Mahal was built in Agra. The buildings made during this era were purely in the contemporary Mughal style and of very high quality which is still reflected in what ever monuments remain in Agra. 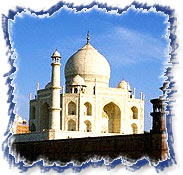 » Taj Mahal- Even as the world is caught in the skirmishes of War & peace, Nuclear and Non-Nuclear; Taj has stood as the epitome of love. This extravagant monument of love is one of the most visited and most photographed places in the world. Today Taj Mahal is one of the most travel attractions of the world. More about... Taj Mahal

» Agra Red Fort - Built principally as a military establishment by Akbar in 1565, the red sandstone Agra fort was partially converted into a palace during Shah Jahan's time.

» Itmad-Ud-Daulah's Tomb - This tomb belongs to the father of Nur Jahan, Ghias-ud-Din Beg. He was the Wajir or the Chief Minister of Emperor Jehangir. The tomb may not be as mammoth as the Taj but the inlay designs and carvings are no less than Taj if not more. more...


Excursion from Agra :
» Sikandra - Travel Four kilometer from Agra to reach the mausoleum of Akbar. Construction of this beautiful monument was started by Akbar himself. This structure has a perfect blending of Hindu, Christian , Islamic, Buddhist, Jain motifs.

» Fatehpur Sikri - 37 kms from Agra is built a city predominantly in Red Sandstone called Fatehpur Sikri. This town was built by the Mughal Emperor Akbar. He had planned this city as his capital but shortage of water compelled him to abandon the city and within 20 years the capital of Mughals was shifted to Lahore.

» Mathura - Krishna, one of the incarnations of Lord Vishnu was born here. Mathura, which is one of the major Pilgrimage for the Hindus is 58 Kms from Agra. It comes before Agra if travelling from Delhi.


Shopping in Agra :
Agra is not only a famous travel destination but is a shoppers paradise too. There are plenty of shopping areas and shopping malls where one can buy the specialities of the place. 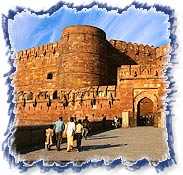 Climate of Agra :
Summers are very hot and winters chilling cold. The temperature difference between the summers and winters is very high. The monsoon although provides some respite from the heat but the rains leaves the city very dirty. It is better to plan your Agra trip between the months of March and October.


How to reach Agra :
The city of Taj, Agra is one of the hottest tourist destinations in India and all facilities have been provided for the easy access to this place. Agra is boast of its own airport and connects the city to all the major places in India. Agra is also connected by trains to almost every corner of the nation including the luxury train the Rajdhani and Shatabdi. One can also avail the excellant bus services to Agra in the state as well as outside the state. The state transports have deluxe as well as ordinary bus services for the place. 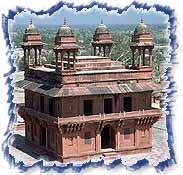 Agra is one of the major tourist destination, where international tourist inflow is also quite good. So the options of luxurious accommodations are plenty. If you are a budget travellers, there are numerous tourist lodges as well mid-range hotels in Agra.


Agra Travel Packages :
Planning a holiday in Agra! Get some of the best Agra tour packages and to die for Agra travel deals. The must grab Agra travel package includes the Taj Mahal and other monuments in and around Agra.